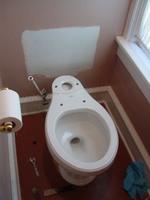 This is what we're -- um, okay, mostly the DH -- doing today. We went to Home Depot last night to buy the toilet. DH asked the clerk helping us if it was the correct one -- twice. He tried to look at it before we left, but one would have to unpack the entire box in the parking lot in order to do so. Get a feel for where this is leading? The "Complete Toilet-In-A-Box" that we came home with wasn't the one we wanted. Nifty idea, though, everything you need, including the seat, in one box. The one we wanted actually came in two boxes, seat sold separately. So, this morning, there has already been one trip back to HD for an exchange, and one trip to the local hardware store (I did that) for some kind of tube thing with fittings. The plumbing stuff isn't actually in my area of expertise as far as home maintenance/improvement goes. That's why you get these technical terms.

I know that the old toilet isn't as old as the house, because the house was built before there was actually indoor plumbing. Most people don't put a toilet right next to a window when planning a bathroom. But it's pretty darn old. It takes a lot of water for each flush, and multiple flushes are often required. The new one is much, much prettier, the base more closely matches the pedestal sink we installed several years ago, but the tank is much smaller. I'm sure that multiple flushes will never be a thing of the past, but I'll feel better knowing that the new one is more efficient in water usage. That white spot on the wall has just been painted.

Here's my first Audrey sleeve and the very beginning -- 4 rows -- of the second. I'm posting a close-up photo in the Audrey blog, if you're interested. The pattern design is awesome -- I'm speechless. I am so impressed with the finished Audreys, they are real motivators, and it's interesting to note the differences in finished fit among them.

I'll be off soon to order A's senior portraits. Though we are very happy with the studio settings, the photographer and the photographs, I should have shopped around with price in mind a little more. I really, really should have. I'm feeling pretty stupid. We're not getting anything fancy here, folks, an 8x10, 2-5x7s, 96 wallets (48 of two different poses), and 8 proofs, and it's gonna cost over $850. Which arm or leg can I do without?? K's were about half that price for the same stuff; I would never have looked for a different studio were that photographer still around! Ouch.

That is a beautiful sleeve and I love the color!

I am AGHAST at the senior photo prices. That is just UNREAL.

Your Audrey sleeve looks great. And I really like that color. Sorry to hear about the toilet situation. We had similar issues in March with a newly installed 1/2 bath/powder room. I hope things go smoothly from here.

Pics are ordered and I still have all my limbs. Chalk it up to lessons learned. In four years, we'll be doing the same thing with M and I console myself with the thought that I ought to be able to come with a good average between the three! Thanks for the nice comments on the Audrey sleeve! As of yesterday afternoon, we're flushin' and it's a-okay.