Does something seem familiar?

The new anthropologie catalog came in the mail the other day. Katie says that she would like to live there! She was most taken by {this no-longer available sweater} and took it upon herself to save $120+ by using part of a twin set that I bought on clearance last year or the year before and by raiding my button jar. 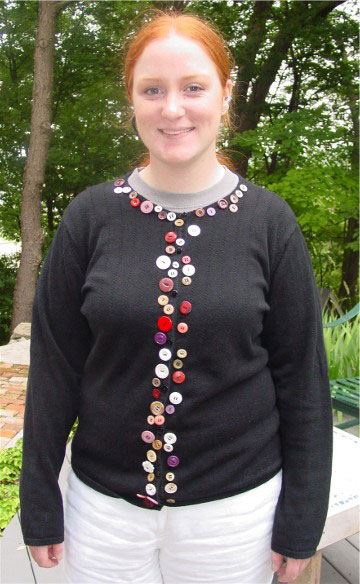 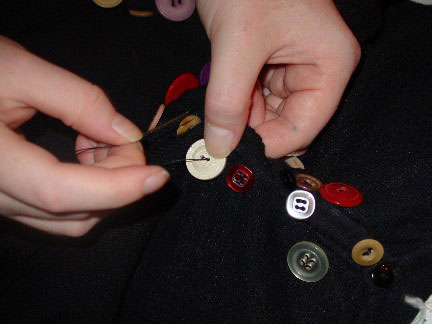 Once upon a time, we splurged and bought her a pair of lace-up moccasin boots from that catalog for Christmas. A few months later, she found them at a Minnetonka retailer for far, FAR less. This experience somehow awakened the frugal gene she got from her dad's mom's side of the family and from my dad's mom's side of the family, and she's more able to squash the impulse and shop around -- or make it herself!!

And, calling upon the practical gene (also from the above-mentioned sources), this year for Christmas (yes, it's more than 5 months away), she's wondering if we'd be willing to pay half of some needed car repairs and call it an early gift. Lord-y. My children never cease to amaze! Car repairs as a Christmas gift!!

Besides the knitting, there was some figuring and calculating done this weekend. Charged up by the very positive response to Friday's post about A.C.Cromarty, I attempted to revise my charts according to the row gauge I was getting. I also cut up an old sheet to the pattern measurements and compared them to some existing clothing to determine fit. The end result of that experiment is that I will still make the sleeves a little narrower than the original pattern so that there isn't as much bulk under the arm, but will probably not revise the body to make it narrower (I'm still keeping that option open, though). Between the time of this photo and the end of knitting time last night, the fourth repeat of the center pattern was completed. 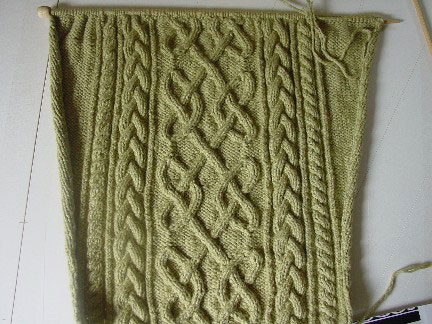 And just before finishing for the night, discovered a little mistake in my chart where I apparently got a little cut-happy in my cutting and pasting and whacked off two rows where I shouldn't have. That will be fixed (more cut & paste) today!

Why did I click "upgrade" rather than "renew" for the virus protection on our computer? There would have been a helluvalotta more knitting time over the weekend had I done so. Several hours, three blasted trojans, and several annihilated adware programs later, we're back to normal at home. Darn, I hate spending time fixing that kind of crap.

I like K's version of the sweater. Last week I was admiring the Anthropologie catalogue too. :)

Cromarty looks wonderful! I wouldn't have thought of Calmer, but how soft it will be!

Oh! My daughter has always had a button "thing" -- she's always put them all over her backpacks. I'm going to link her to this -- she may "borrow" the idea, too!

Now I'm wondering if I should even make Audrey. I think she is sooo beautiful though. Calmer's the BEST! I love what your doing with it. Can't wait to see the end result!

How on earth did I miss Cromarty? I love it! Any further thoughts on yarn for St. Brigid? I ordered mine today. :) I got Jameison soft in Wilkinson. It is the original color in Aran Knitting. Anyway...love, love, love Cromarty and K's sweater.

What you have called "bellflowers" (growing on the west side of your house) in your June 8th post - aren't they really columbine(s)?

My spelling is probably off, and I don't know if the "s" at the end really should be there. (It's not pronounced out loud - at least in *my* local dialect.)

LOVE the button sweater! I swear, looking at your daughter is like seeing a preview of what my own daughter will look like when she gets older. they look VERY much alike!

Your Cromarty looks just divine, all those cables, ahhh!