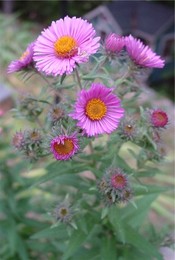 The late summer/early fall flora is starting to get pretty. These asters have been growing near the wall in the backyard for quite a few years now; I think they were originally transplants from my mother's garden. 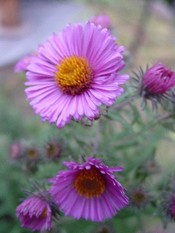 They get quite leggy and they're top-heavy when blooming, so I usually have to stake them. This year, I cut them back by almost half in early July and I think I got it right this time. Last year I whacked too much, too late and didn't have blooming asters at all!

Do you see the little spider? He's atop the flower at left, and still visible after crawling underneath at right.

It's too funny that both Marta and I knit bulky hats over the weekend -- two nearly identical hats each! Heather says "ham-fisted," Christine says "Flintstone needles," and Yvette says just "weird." All are accurate descriptions of knitting with US17 needles! Not my faves, but they sure make for a fast knit! And Kim is right! I loved the Waterspun Weekend yarn and I wouldn't mind more. Thanks for all the nice comments -- love 'em!

St. Brigid and I spent some quality time together watching last night's football game (the Packers won, and I won the football pool again!). I only had to tink back a half-row twice to fix little things. I am more than half-way through the fourth repeat of the main chart and there are only five altogether before the saddle, so I'm going to knit until it's finished; then I'll pick up Cromarty and finish the first body piece. And then, we'll see...

Your asters are so pretty. I just finished my Meathead hat-- I hated the size 17 needles!

Oh, OH! I'm glad you pointed out the spider -- never would have seen it. Don't you love those guys that are like little chameleons? I get some on my white-cupped daffodils in the spring. It's amazing!