More cables
Talking to myself

For the past six months or so (maybe closer to a year), I've been meaning to back up all the digital pics on my computer to CD.

Our computer crashed on Friday, turning fatal on Saturday, and my pics are gone. I'm clinging to a shred of hope that something can be done, but it doesn't look good. My brother is geekier than your Average Joe and maybe he can help or advise.

DH had recently backed up a big project he was working on, and I backed up all the photos I'd scanned from Mom's photo albums and the Family Tree Maker file, but my most recent backup of Quicken data was in April and that means I have some work to do.

You just never know when it's going to happen... Everything's fine and dandy on Thursday night, and on Friday morning there's a message that a crucial file is "corrupted or missing" and Windows won't load. Folks, it's downhill from there. I thought I had it back on Friday night, but it was even worse on Saturday morning -- failure loading the operating system. 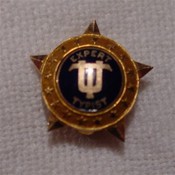 This is one damn hard lesson.

It's a good thing I have this -- another little treasure from Grandma's house. I imagine that it was earned by one of her kids in high school -- either of my aunts, or possibly even my dad. Dad took typing because a girl he liked was in the class; it's a skill that has served him very well over the years. My DH has very limited typing ability, but it was enough to enable a move from infantry to company clerk (he was a "Radar O'Reilly") during his tour of duty in Vietnam. I earned a certificate for typing 70 wpm in high school, myself, but this little "Expert Typist" pin is way, way more cool. I believe I'll even wear it as I buckle down to play catch up and try to recover.

Oh I do hope you manage to retrieve all your missing photos, and I must back up all mine....
Hope you get some knitting time soon.

If it makes you feel ANY better, know that you are getting all of your readers to back up their pictures--today!!

eeeeckk going to backup tonight! Sorry you had this happen .

Sorry to hear about your computer woes. What a timely reminder for the rest of us to back-up those files.

I enjoy looking at your cable work. Just lovely.

Cromarty is looking so awesome. The cables stand out very well.
I'm so sorry about your computer crash. :-(

I'm so sorry about your computer break down. This happened to me one time also. Very discouraging. From that point on, I started using my laptop for internet only and save my big Dell for all my Quicken and book work (never go on line with that one). I do have most of my photos on the laptop. Memo to self: back up immediately!

A cautionary tale, and I will take it to heart. I'm adding BACKUP in capital letters to my to-do list. Near the top.