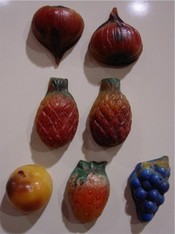 Seven fruit- and vegetable-shaped refrigerator magnets that have clung to the door of the fridge du jour at Grandma's for as long as I can remember -- that would be going on 40 years, I would think. Other magnets have come and gone; none remain in memory, or evoke memories, like these. I just realized, looking at the picture, that I've arranged them in order of which I like best; the shot with my finger is for scale. They're definitely small treasure.

Grandma always had numerous magnets on the fridge, but many times they held nothing or were decoration themselves -- a beautiful image or inspirational verse. She never had the fridge cluttered with snapshots and clippings (like mine); at most, they held the church bulletin and church calendar, and an occasional appointment reminder.

When I was little, Grandma's kitchen was HUGE. An efficient work triangle? Never even heard of when that baby was designed. A fairly short bank of tall cabinets, probably '20s vintage, ran about 2/3 the length of one wall and held the sink; the fridge was on the opposite wall, and the stove sat all alone on a third wall. There was a big Nutone fan with a pull-chain in the wall above the stove. Task lighting? How about a round fluorescent fixture in the middle of a tall ceiling and a bulb above the sink? The kitchen also held a dinette set and a mangle. The mangle came with the house; I never saw it in operation, but it was always there (it weighed a TON).

The kitchen was remodeled in the '70s. What was once one big, square room became two; a smaller kitchen with a more efficient U-shaped cabinet design (and a dishwasher), and a smaller mud-room/pantry with exhaust fan which soon held a couple of ceramics kilns -- 'til they were displaced by the washer and dryer after Grandma tripped on laundry in the basement and broke her hip. The fan came in handy when the laundry room also became Grandpa's smoking room after he was forbidden from smoking in the rest of the house.

The mangle was moved to a far corner of the basement 30 years ago, and it resided there until last Saturday when my uncles hauled it up through the cellar entrance and cleaned it up. My mother is interested in it; she is the only person I know who irons her sheets (apparently, Martha has two of them).

Oh, the eyes of a child. It couldn't have been more than 20 feet from the dining room doorway across to the stove in that original kitchen, but it seemed like a mile. The tall cabinets, tall ceiling, appliances jutting out from the walls, the lighting, and my little-girl-perspective all contributed to that little trick.

Love the magnets. Nice memories of the kitchen.

I, too, remember by Grandmother's kitchen as being the biggest thing I had ever seen. That was the gathering place for everyone. She had what seemed like 12 to 15 foot ceilings. There was a huge kitchen table, lots of cabinets and an old white ceramic sink that you could take a bath in. We had some good times in that old kitchen. Thank you for jogging my memory and allowing me to remember fun times many many years ago.

Oh, I love refrigerator magnets, and those are just wonderful. How nice that you have those memories of your grandparent's home.

I too loved my Grannys house, it was tiny and always had a lot of people in it, but it left me with lovely warm memories, usually of sitting on the floor listening to all the chat. (I was too young to be allowed a seat!) Its nice to have things to help you remember.
My friend irons sheets too, YUK!! No thanks

What a lovely post; your magnets and memories have made me miss my Gran tonight, but in a good way. Thanks!