I was on the road over the weekend, overnight to the southern part of the state to visit with two sisters.  I did manage to knit a measly two rows on St. Brigid on Saturday night -- which is better than the last time I visited when it was zero -- and a few rows last night while I did laundry, but that's about it.  I had a nice visit, though, and was able to do a little bit of shopping.

The spending-my-Christmas-bonus-early book came in the mail over the weekend -- Latvian Mittens by Lizbeth Upitis!  I purchased yarn last week to start a two-color mitten pattern in Knit Mittens, and might try to incorporate an element or design of Latvian influence.  We'll see... the two-color knitting might be all I can bite off right now.  I'd actually brought Knit Mittens and the yarn with me over the weekend, but didn't bring the needles.  Duh. 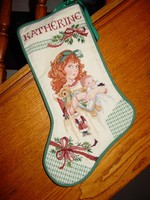 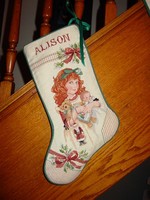 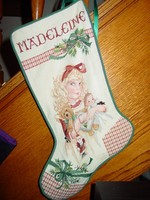 These are the grrs' Christmas stockings.  They're a Jan Hager design called "Carol."  Carol was a brunette and my grrs are not, so I experimented to make two redheads and a blonde.  Actually, I've made three redheads, because I also made a stocking for my mother (who also has red hair, but takes after her grandchildren rather than the other way around -- if you get my drift).  Sometime between the stitching of Kt's and Ai's, I found the male version of this designed, called "Chris," and used the design from that pattern for the toe and top of Ai's stocking.  For Mdd's, I used the original design (as in Kt's), but switched the colors for top and toe.  And sometime between Ai's and Mdd's, I decided that I did like the old-fashioned "A."  I would say that I stitched the majority of these in 15-minute increments during breaks at work and in what was left of my lunch hour those many years ago.

Ohhhhhhh I love love love those stockings! You *know* I have a soft spot in my heart for anything depicting little redhaired children! (I can't imagine why!Hee!)
Seeing them almost make me rethink my disavowal of cross-stitch. I've never been able to make it through an entire project! Just gorgeous, thanks for sharing!

They are gorgeous - very festive! I'm partial to the "Madeleine" one :).

Yet again I say "ditto" to Mary Beth's comment! I love the stockings~ what wonderful keepsakes.

Wow, they're birllaint! I would never have the patience to do them...Woah!
I hadn't seen them on the blog before now, how are they done? Is it cross-stitch or something else?

The stockings are beautiful. I love that they are all the same...yet unique in their own way. Makes me want to get out my cross-stitch. I did tons of it in the 80's. Thanks for sharing.

Your girls christmas stocking are amazing, so much work.
What a lovely thing to have and keep.

Ohhhh...Latvian Mittens! I can't wait to see! The stockings are breath-taking, you have one lucky family!