"Dizzy" is the name of a song by Tommy Roe.  I loved that song so much when it was released that I used my measly allowance to buy the 45 -- and I didn't even have a record player to play it on!  I still like that song and crank the volume.  I usually make it a point to turn the radio down before I get out of my car, but I'm still often BLASTED when I turn it back on because, well, I guess I like my music LOUD! 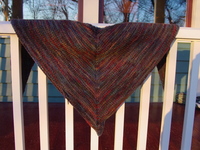 Here's my sister's Christmas Shapely Shawlette draped over the back porch railing, soaking up some morning sun.  It's not that red, folks; the yarn refuses to photograph.  It is actually dominated by green and blue.  I have a couple of ends to weave in and that will take but a few minutes.

My baby sister, eating for two now and putting on weight, forgot to take our Nordic Trak when she was here last week.  She had a ski machine of her own, and loves that kind of exercise, but it broke and she wants to borrow ours.  I talked to her the other night and she told me that, in desperation, she came up with a temporary solution -- she put a Swiffer under each foot, held on to the back of the couch, and away she went!

I have lots 'n lots to do today!  I'm doing the Norma and transcribing some interview tapes -- three down, three to go.  It's very archaic -- I have no bells and whistles and I'm sure Norma just shakes her head.  "Better you than me, kid."  I think of her every time I see a court reporter on TV (they're there more often than you think).  In a wide shot in "To Kill A Mockingbird," all eyes are focused on those leaving the courtroom at the end of a day, but I watched Atticus as he walked over to the court reporter's table.  This guy was doing it in shorthand, people.  Yikes!  Anyway, Atticus walked over and put his hand on the guy's shoulder, gave him a smile and nodded his head.  He might have been saying, "Good job, Joe."  I think he was saying, "Good job, Joe.  You'll get me those transcripts as soon as you can, huh?"

Oooh! Ist it the one that goes "Dizzy - My head is spinning. Like a whirlpool it never ends?" I love it too!

You and your family are too funny. Just a thought of a pregnant woman attaching swifter pads to her feet and hanging on to the back of her couch had me laughing off my chair! When there's a will, there's a way!!!