Let me entertain you

He sees you when you're sleeping 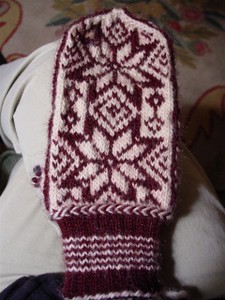 I'm smitten with a mitten, and I'm not the only one. Katie loves it. Maddy loves it. Ali hasn't been around much, but I'm sure she'd love it, too. Maddy wants it/them -- even more than the pink thrummed mittens. I think the thrums will win her over on her first walk with Mickey on Christmas Day when it will be 20 below with wind chill. After the photo op, I picked up the stitches for the thumb (peeking out at left) and knit about half. Woo.

Katie's home! My heart's been warmed this week, reading about holiday prep and homecomings. I couldn't help but remember this time last year when Katie came home after her first semester away at college. We hadn't seen her in four months, and the whole family went for a late-night greet at the airport. I spotted her before she saw us and busted my buttons -- I was speechless. DH stood right next to me and asked, "Where's Kate?" Expecting to see the high school kid we'd sent to college, he didn't recognize the sophisticated, confident collegiate that returned. "Did you know she was going to look* like that?!" 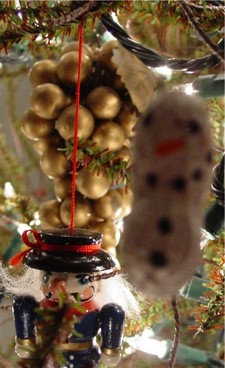 As the Christmas ornament parade draws to a close... Hey, there's Peanut! This is probably the dumbest ornament on the tree, but we've all grown quite fond. It was one of many gifts/ornaments I received at the cross-stitch retreat where I got my tree skirt project. It's a regular old peanut in the shell, painted to look like a snowman -- he has a painted carrot nose and a HUGE charcoal smile. Next to Peanut is one of a pair of small nutcracker ornaments that has a working lever in the back. In the rear is a bunch of gold plastic grapes that Mom gave me; they'd belonged to her mother. I found that there is significance to grapes on a Christmas tree, as well as pickles and many other things! 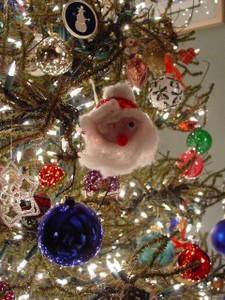 As at the end of every Christmas parade, Santa Claus brings up the rear. You better watch out! Even with only one remaining googly eye, this Santa can see you when you're sleeping and he most certainly knows when you're awake! This is Katie's second grade handiwork. Our one-eyed Santa joins many, many other ornaments made by the kids -- among other things, there are be-glittered pinecones, pipe cleaners, cotton balls, clay, paper, plastic lids, puzzle pieces and old cards.

In yesterday's comments, Cara wrote, "Every Xmas I send my best friend ornaments for her tree. Every year she says when they set up the tree, it's like I'm there! I love that." That just couldn't be more true. It's been so much fun to share some of my ornaments and their stories and memories with you -- and to hear about yours in the comments you've left and to see and read about them in other blogs! I have plenty of plain jane ornaments, but even many of those have memories attached... the shiny blue and clear green ornaments in the Santa picture were Grandma K's... the crocheted stars made by my aunt... lots of ceramic ornaments made by Grandma B... the glitter-covered, pock-marked, styrofoam balls that hung on the trees of my childhood. ;There's one ornament that I swear I won in a first grade spelling bee, but Mom recalls that I made it -- we "argue" about that every year -- it looks like shit (it's been a WAY lotta years) but it gets a place of honor every year. Katie put her ornaments on the tree yesterday and later told me that she moved that one, briefly wondering why such an ugly thing was on the tree, and then she remembered... That's what it's all about.

*She did get a tattoo while she was away, but that wasn't the big difference. DH was not privy to our chatty, girl-talk emails where I'd learned that she was styling her hair differently and shaping her eyebrows and wearing make-up -- those things were part of it, but even more, I think, was the confident and sophisticated air about her -- there was truly Something About Katie...

your mitten is beautiful.happy holidays!

I'm smitten with your mitten too! I love it. And I'm amazed at how quickly it has knitted up.

The mitten looks wonderful. Thank you for sharing your tree - it's been a warm spot to come to this holiday.

Love the peanut Santa. We have a hazelnut mouse in a walnut shell - what is it about nuts? I'm crazy about the mitten too. There will be fighting over that pair! You may be knitting more of the same.
Have a great holiday, Vicki.

I LOVE that mitten! And I think I love the peanut snowman even more. At the risk of sounding like I'm mocking the handicapped, he looks a little "special", which cracks me up! We have a collection of snowman ornaments. And grapes, a carrot, a lemon. And wine bottles and cocktail glasses. I can't really explain it, but they're ours and we like them. I'm so sad my mom ditched all the old cheap and tacky ornaments I knew and looked forward to each year growing up. Tacky they might have been, but they hold such a special place in my memories. Thanks for sharing all of yours with us!

WOW - the mitten is wonderful! What a great feeling it must be to have a child home from school - I do not look forward to the day mine leave. Have a wonderful holiday.

Mitten is wonderful. And I have really enjoyed your pictures. : )
No tatoo on Carrie's body yet but everything else you say about the differences is so familiar at this house also.
Have a wonderful Christmas!

your mitten is magnificent! what a fabulous job you have done ..... you have me thinking about starting something like that ....

Have a very Merry Christmas Vicki surrounded by your lovely family!

Vicki,,,
I have a Katie too! And there is just "something about her," also. She can make me laugh like no other, has a most engaging personality, chose and incredible son-in-law for us, and always remembers the little things. It was kate who searched for the perfect ornament one year...a very flat dog, that she chose because "he looks just like Fritz when he got hit by the car, Mommy!" Many blessings to you and your family this Christmas...no greater joy for us as moms to have all of our kids at home for the holiday!

I don't know why but that one-eyed Santa really tugged at my heart. Something about it still being loved in spite of it's imperfections. That peanut is great, too. Thanks for sharing.

What pattern did you use for your red and white mittens? They're beautiful. I must have a pair for myself!