In the Land of Futz & Putz

Yep, step right up for your daily dose of lunacy!  Bonne Marie calls it "mitten mania" (isn't she kind!).  She linked me in her sidebar and she *hearts* me, she really *hearts* me!  I'll tell ya, it's better than a triple-chocolate brownie for breakfast.  It was while doing an internet search back in February or March for something knitting-related that I happened upon ChicKnits and what a treasure trove of information, inspiration and energy it was.  I sat bug-eyed at my computer for days and days and days.  Her site was my portal to the world of knitbloggers, too; prior to that, I had no idea that there was such a thing and only vague knowledge of blogs in general. I added her to my Favorites and she was my jumping-off point for a long time ('til I started my own blog, I guess).  I would have to say that, unbeknownst to her I'm sure, Bonne Marie is the #1 reason why I started blogging and why I look at my knitting so differently now -- the woman is fearless in everything she does (the way she cuts things up without even a tremble!) -- and shows everyone WHO's the BOSS:  You Are! 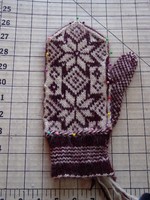 I finished the thumb while watching the Eagles send the Vikings packing, then took Stephanie's advice and blocked it -- wet, no steam -- and it's still pinned out so I don't know the result.  I may have found a little extra length, but is it enough?  When I look at my fingers in relation to my thumb on my hand, and then look at the same on this picture, well, they're a lot different.  Results of the jury will be forthcoming tomorrow.  I didn't lose any sleep over it.

The little Tanguy hat is progressing -- the triangles and brim are finished and standing by on the needles to be joined with the hat.  The hat was cast on with an "invisible cast on," which I'd never done before, and I hope it's right; I followed directions from my Vogue Knitting reference book (the only book of three where I found directions).  I'm at the point where I'm making decreases every 3rd row, so it shouldn't be long.  This little thing may be small (I did not swatch), but it's so cute and quick that even if it fits a teddy bear, I'll be just fine.  I love the way it just sits there in Kate's picture and think it would make lovely decor, too.  I'm using lovely beaded stitch markers that Yvette sent me long ago -- finally something on small enough needles to use them.  They're very cute (thanks, Yvette!). 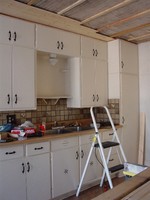 I had a hammer in my hand and nails in my pocket for a good part of the weekend.  This is where we were at game time (noon) yesterday.  If there was a Land of Futz and Putz, my dear husband would be king; he spent nearly the entire day on Saturday working on those little strips onto which we're nailing the beadboard -- cutting them "just so" in order to make the ceiling level, screwing them into the ceiling, putting in shims here and giving a shave there, and Good God, Let's Get On With It!!  The whole damn room and everything in it is off-kilter, but the ceiling will be level!  Anyway, we were more than half-way by the time we called it quits yesterday.  It's looking very fine -- and level.

In between construction and knitting, I finally hooked up our refurbished computer, installed a mouse with a cord on another (the wireless is great but very jumpy), did lots o' laundry, roasted a chicken, and watched a little football.  I didn't leave the house even once.  Too darn cold, for one thing!

yay for house projects! I have my fingers crossed for your mitten outcome!

Go Eagles! Hope the house stuff goes well - we've been homebodies this weekend - but have we gotten anything done? Not really. Sounds like you've been a lot more productive.

Oh my word...you have one of those, too? My husband is the ultimate list-making, detail oriented, measure 3X-cut once, organized, Mr. Home Improvement...it just cracks me up. He has, however, taught me not to paint an entire room after I wake up deciding I think it would look nice red and it needs to be done by noon. I'm not as impulsive as I used to be!
Too bad about the mitten, Vicki...It is just beautiful. I'm not sure what I would do!