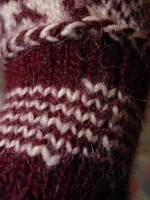 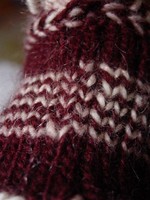 The mitten is kicking my butt.  I did not have the mistake I feared yesterday, but found an earlier mistake -- in the first row of the braid -- and ripped it all the way back.  I'd purled the damn row rather than knit.  That's the third time I've knit that braid.  It can only be lack of concentration -- I was so intent on following directions the first time and didn't have a single problem, me and my cocky attitude are being put in our place with the second.

There are no guarantees that I even did Meg's Jogless Jog correctly, but you see the result at right compared to plain ol' circular stripes (spiral) on the left.  What do you think; is it an improvement or a wash?  I think it's kind of a wash. 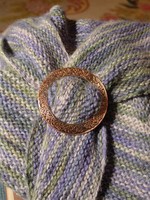 I've been playing with closures for the SP2 Shapely Shawlette.  I wear it a lot and had been making a knot, but then I look like I have a uniboob when I put on a jacket.  When Lynne sent my prize alpaca, she'd tied it all up and included was a sparkly, plastic belt buckle which I used the other day. This is one that I cut off an unused belt I had.  It works very nicely and lays pretty flat -- I'm looking forward to thrift shopping for potential shawl closures! 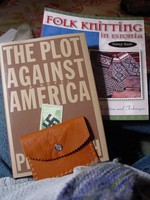 It was a good mail day yesterday -- two packages!  The first contained books (the redemption of my B&N Christmas gift card), and the second was a leather coin purse that my sister made for me.  Every year, for the past several, she's made "Martha gifts" for our mom, her MIL,

sometimes sisters and SILs -- always a project from Living magazine.  This year, it was leather coin purses.  She had extra leather, so made one for me -- and look what I found inside!

I'm ready to talk about Duncan now.  Who knew that the best way to introduce a new cat is to throw 'em all off-guard with a dog, first!  When Ai's friend called before Christmas and asked if we could adopt her 4-month-old kitty because things weren't working out well at her house, my hesitations were 1) do we really need a third cat/fourth pet and 2) the poor kitties have just gotten used to a dog, how will they react to a new cat?  Well, apparently Scamp & Roxie figure that there's strength in numbers -- I cannot believe how well Duncan has been "accepted."  Hmmm, not with hugs and kisses from the others, but not nearly the amount of hissing and spitting and pet mayhem that I was expecting.  Duncan has melted our hearts, for sure, a real sweetie-pie, and he has obviously charmed the other felines, too.

Coming up on Monday:  someone's getting a new 'do.  Have a great weekend!

We always pay the hard way when we think we "know" what we're doing. The glove is beautiful anyway. And that cat...wish I could curl up and get comfy like that.

Darling mitten...and darling kitten. (sorry - couldn't resist!) Great idea re: belt buckle shawl closures. I'll have to take a trip to the thrift store too! Can't wait for the new "do". :)

Yay, Duncan pictures!!!! Love the mitten...can't wait for my copy of Folk Knitting to get here so I can try one.

Your sister is a hoot...love the inspected by ticket...

You did have a good mail day. Almost makes up for the mitten mistake~ which looks beautiful, by the way.

Can't wait to see the new do!

That kitty is darling..... I love the mitten. Are the brais hard to do. The Latavian Mitten book is the only one I don't have. Soon as I wind up a few more projects I am going to dive into the mittens.

I love your kitty! We too are three cat, one dog people. Some may call us crazy but I couldn't give up any of them. We got our third cat because he was at a shelter for three months because nobobdy wanted a deaf cat. Now we wouldn't give Radar up for the world (and he is frequently featured on the blog). Good luck with your new member of the family!

Vicki, the mitten looks delicious anyway! You really have inspired me to do a little folk-style knitting...after two scarves, a sock, a sweater.......

I guess I will just have to become a three cat one dog family too, seeing as it's the "now" thing to be!

Your mitten is gorgeous and I'm right there with you...I'm doing the maimmu mitten and wow...it is giving me a run for my money! Each row is a new adventure!

Your mitten is gorgeous and I'm right there with you...I'm doing the maimmu mitten and wow...it is giving me a run for my money! Each row is a new adventure!