Okey dokey, how 'bout some knitting
Shot to hell 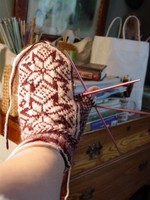 I don't care how many mittens I knit, I don't think I'll ever stop trying it on in the middle of knitting the thumb with DPNs going every which way.  It tickles me.  Even when I'm somewhat displeased with the mitten (like now), this little trick humors me.

Yes, I am displeased.  I finished 'er off last night and tried it on.  Hmm.  Somewhere between the first and second snowflake on this little number, I must have given up my loose ways because this baby is SMALL.  I was so happy with the feel and fit at the half-way point, but man, things changed.  It even looks smaller -- noticeably -- than the right-hand mitten.

So what did I do?  I pulled out the Tanguy pattern and drew the Baby Ull near.  I knew that starting the hat, no matter how fun and new (and colorful), was not going to make things right with the mitten, but I needed a diversion -- even if only for a minute.  I read through the hat pattern and contemplated colors, then I picked up the thumb stitches on the mitt.  I'll knit the thumb, then tear out half the stupid mitten (that I really do love very much, just not so much right this minute) and re-knit it.  I'll do it all before starting the cute little hat (or anything else). 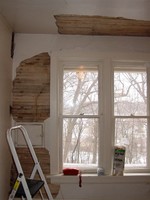 Before leaving for my dentist appointment this morning, I cleared all the crap out of the upstairs kitchen.  We don't use it as a kitchen, of course (it's storage, what else?), but the cabinets and sink are still there (handy, too!).  The big hunk o' plaster missing from the ceiling came crashing down some time ago while my young nephew was upstairs playing.  I believe he thought that the sky was falling, or that somehow it must have been his fault.  Poor thing.  In reality, it's the result of having hired the roofer from hell some time prior to that.  Yes, hiring a shitty roofing contractor can have major consequences on the ceilings in your home.  Especially an older home with lathe and plaster.  Cheap can end up costing LOTS.

So, it's really been quite some time since that chunk fell down, and the walls suffered from some of our own happy hands at home remodeling downstairs (jacking up a wall, putting in a microlam beam), and we've decided that it's finally time to fix it.  While I was listening to Elton John (quite loudly) on headphones as the dentist broke a sweat scraping plaque and tartar off half my teeth, Kate & DH took the plaster off the ceiling.  He's up there cleaning up the mess (Kt's on her way to a knitting at the coffee shop date with one of her friends!) and I'm waiting for feeling and normal speech to return.  We left the lathe and will staple some plastic over it later today.  I can't staple with a numb mouth.  Then we'll be putting up beadboard -- I love that stuff.  We're going to do a panelled (but not really) thing on the walls that'll go up about 3/4, and I have some pansy wallpaper (scored at a rummage sale last summer) that will cover the rest.  There's a lot to do before we get to that point, though.

Celia's International Pajama Day is on my calendar.  Sunday, February 6th.  It's not official -- cripes, who would schedule that on a TUESDAY? -- but who cares, it's pajamas?  Honest to God, have you ever seen anyone looking more relaxed than Celia?  I want to look like that.  I will!

Ooh - sorry about the dentist - I'll have nightmares tonight for you. Good luck on the house repairs - we donated $600 to our plumber's kid's college fund yesterday. Great times!

Sorry about the mitten - it'll all work out! I have faith!

PS - Is that Ann Budd I see in the background?

That is the same thing that happened with my mitten....it is tighter from the thumb up. I am going to try to aggressively block mine. Beth over at "Stuck on Socks" did this to hers with good results. I just LOVE your mitten. You did a wonderful job!

Wow. It sounds like you're having quite the challenging time...roofs crashing and the dentist in a 24 hour span, not fun at all. At least you're nephew wasn't hurt, your teeth are clean, and there's a renovation on the way! :0)

I love beadboard too. I've put it up in every house we've lived in. Your mittens are wonderful.

Those mittens look great! I do that trying-on thing with my toe up socks. Needles sticking out everywhere! Makes me laugh every time, but then I'm easily amused!

I'm definitely on board for pajama day as well! :)