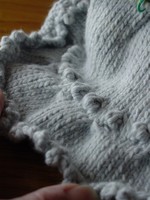 Isn't she lovely?  I'm almost there with Miss Dashwood.  I muttered all the while I was doing the bobbles, but it was definitely worth it.  I just love the little tuck or pleat or whatever you want to call it combined with the bobbles -- this is one pretty little hat!

While watching the Oscars, I finished the actual hat, knit both earflaps, and one of the ties.  They are 11-inch, 2-stitch, k1p1 ties -- not as bad as bobbles, but Oh My.  I'd considered doing something else, even considered pulling out a crochet hook, but they really need to be done the way they're written. 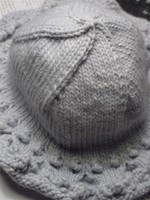 It's a very firm, dense fabric, and will be quite warm, I think.  Look at that curly, curly brim!  Blocking will happen very soon.  Ai wants one -- supersized!

My eyebrows got some exercise late yesterday while I was reading Wendy's post.  Wow, look out...  Here come da knitting judge!  Good grief.  It appears that the jury has deliberated, however, and Bad-Ass Knitting has come out on top.  Almost makes me want to start a garter stitch scarf on some big-ass needles.

In other news, that Curlie Girl ought to be having a debut soon -- Her Majesty St. Brigid is nearly complete -- and I can hardly stand it!

Kt was home this weekend and, boy, it was a busy one.  Ai participated in the solo ensemble music competition -- I missed one of her performances, and she almost did, too, because I was in the wrong room.  Argh.  She had a solo in the morning and triple-trio and madrigal in the afternoon.

In between, we did a little shopping while Kt gathered applications -- she'd like to find an additional job for summer.  At this time next year, she'll be studying abroad (England), so the wallet needs some fattening.  And while we were doing that, Ai learned that she got the job she wanted!  She's so excited (she'll start next Monday) and has already done the math (hours x wage = more than she's used to).

I got a bit of a start with the dreaded taxes, turned a mountain of laundry into a molehill, went to Home Depot to choose paint for the upstairs kitchen (very tricky), and watched the Oscars.  I love award shows!

It's so sweet and I love the color. It would look so sweet in baby's room, hanging from a little peg.

The hat is looking fabulous - makes me want to break out Sense & Sensibility all over again. Love those Misses Dashwoods.

Yeah for jobs with more pay!

It's adorable. Makes me wish I had someone to knit it for.

Cute, cute, cute! What a great looking hat. It's on my list for future babies!

I think my little niece is going to get one of those very shortly!

Miss Dashwood is one cute hat. And who is the lucky recipient? I must say I'm curious as to what you are going to use the upstairs kitchen for? Midnight snacks?

I was out at the Yarn Stores looking for yarn for that little number on Friday. I decided to hold off and hear your final verdict. Your work-arounds are ingenious!

If it had been in yellow, it would look like a daffodil!
It's so cute!

What a sweet hat!! I love the bobbles, although I am sure that they were a pain to knit.

How wonderful that your daughter is going to be studying in the UK. I have some wonderful friends over there and I love going over when ever I get the chance :-)

Oh it is soo cute! I hate knitting bobbles though!

Ms. Dashwood is totally cute. I'm glad someone else knitted this one up first so I know it's not impossible and there are no errors.
Now to scrounge up some blue sky alpaca...

Oh Miss Dashwood! Adorable! The bobbles were worth it!

Thanks for the added inspiration to complete the final seams! It looks like I'm going to have quite the snowy background for the debut of my St. Brigid...we're in the middle of two snowstorms!