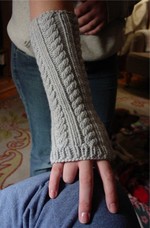 Heh.  Mom stood me up yesterday.  She made plans with someone else!  She did invite me to participate in the new plans, but I passed.  We've already rescheduled for next week.  Mdd was all in a tizzy yesterday morning, helping with Duncan for his trip to the vet, and she forgot her backpack.  When she called at noon to see if I could drop it off, I grabbed DH*, dropped off the backpack, and went out to lunch with him instead!

Mdd was so tired last night, but propped her eyes open long enough for me to finish her Natalya mitt.  Mmmmm, Blue Sky Alpaca Worsted.  (Thanks, Lynne!)  It took just about one hank and, wow, is it ever nice -- so soft!  Mdd does have a full finger and, as far as I know, this isn't any kind of teenage hand signal with hidden meaning -- she had a big ink blob on her finger and didn't think it was very photogenic.  She was planning on wearing her mitt to school today!

Project Runway seems to be my "finishing" show!  I watched the marathon on Sunday while finishing St. Brigid, and the finale last night while finishing the mitt.  I was both surprised and happy that Jay won, by the way -- very fun stuff.  I really loved Wendy's clothes and the colors -- Oh! -- I would wear those clothes, but I am old like her, maybe even "dowdy."  I'm a little more demure these days (and a little less, oh, shall we say "perky"?), but I've worn peek-a-boo stuff like the dress that made Michael Kors' eyes pop -- I think he had definite, pre-determined ideas about Wendy.  Kara's clothes were okay -- extremely well made -- but she showed her unflattering, hm, even hypocritical, side last night.

I thought about starting Miss Dashwood, but I don't have the correct circ in my paltry collection (I have the right size, but not the right length).  Duh!  I was just at my most local LY(&gift)S yesterday, too, with the Miss Dashwood pattern in-hand -- I never even checked my needle situation.  (And yes, I was wearing St. Brigid.  "Oh, that's pretty... we're really big into felting right now...")  So I cast on for the second sleeve of Cromarty!  I only did two rows, but sometimes the hardest part is getting started...

St. B also went to Target!  Mdd wanted to go shopping for a bra.  She's so funny.  She measured and told me what her size was the other day (I'm not sure where she got this measuring info), and said it letter before number, rather than the "normal" way.  She won't change the way she says it, either; I feel like we're playing Bingo!  She made two trips to the dressing room with seven different bras and none of them fit right.  Naturally, she wouldn't let me even squint into the room, so I had nothing but her description of what was wrong to guide me.  Turns out that she's not even ready for the letter part yet.  We cruised through the grrs department, where they go by number only.  By that time, of course, she refused to return to the dressing room, so I brought home two on approval.  They passed.

*I came home from work the other night and Deb Stoller's Stitch & Bitch was on the kitchen table.  I was a little confused -- Kt gave me "Nation" for Christmas, so this looked familiar -- yet not.  DH had been at the book store and he brought it home for me.  He wasn't sure I had it, or even wanted it, but it caught his eye.  Too sweet.  Plus, the other day, he says to me, "I think it's really cool that all our grrs know how to knit!"  I think a little lunch date was in perfect order!!

I might owe my sister lunch, too.  I'd sent her an email pic of St. B the other day and, she said in this morning's email, that she felt moved to tell two little ol' ladies who were looking at knitting needles in Wal-mart all about it!  I have no clue what my sister was doing in that department, either.

You're so funny! I just happened to be bra-shopping the other day (I can so relate to your *perky* comment, sadly), and noticed that there is a line of "nearly-A, nearly-B, nearly-C" bras. Can't remember which brand~ maybe Playtex? But they were cute. :)

Yay for the thoughtful hubbands. :) I have one of those too. They really are a delight. And the mitt is gorgeous - missing daughter ink finger or no!

The Natalya mitt looks great. I really liked Jay's show last night too, more so than I had liked alot of his other stuff. (My favorite though had been Austin.) I loved all Jays knits, maybe that's why it was my favorite.

The Natalya is very cute, how nice to have a lunch date with your thoughtful husband.
I have trouble enough bra shopping for me, am so glad I don't have anyone else to do it for!

The hubster is a cute one!

I love the fingerless mit! I need to do some of those.

I watched Project Runway last night too! I liked Wendy's clothes the best. It actually looks like something someone would wear(urr, except the boobie top). I liked Jay for his creativity and his knits, I was glad he won over Kara. Talk about sneaky with those shoes!