I finished the wallpapering yesterday and I had a feline supervisor.  The tile that you see behind Duncan is a problem.  They're nice tiles -- handpainted trillium and mushrooms stuck randomly throughout -- in good condition.  They don't "go," but they're not coming off -- that's too big a can of worms, too many unknowns.  I'm happy to ignore it, but it's a thorn in Ali's side.  Do we dare paint it?  Can I fashion some kind of cover-up?

I had plenty of wallpaper and only had to use a few of the pieces that had registration problems -- and those I placed mostly above doors and windows.  DH stained the crown moulding yesterday and might put it up today (it's pickled, same as the ceiling).  He'll work his way down, building the cap and applying the strips to the paneling, and then he'll bow out and let the painting/decorating team take over. 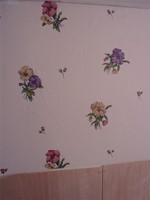 Here's a closer view of the paper.  The background is off-white, but with a hint of pink -- the wood on the ceiling has a bit of pink, too, and they really look nice together.  There's kind of a dusky, antique coloring to the paper, which I really like.  The yellow pansies have an almost parchment look, very similar to those in a favorite, vintage Paul de Longpre pansy print* I have in the living room.  I'm no professional, but I don't think I did too badly matching at the seams.  (I did get paid to paper once; DH worked for a firm that designed trade show displays and one of their customers was Kohler.  They had a few displays that needed papering and I was tapped.  It was very cool, but scary -- limited quantities of expensive, handmade wallpaper made me kinda nervous.)

I had an email last week from Shelli in Canada.  She'd been searching for paint in a terra cotta color and was having a hard time finding one that wasn't too orange or too brown or too red.  She perused the While You Were Out album and asked for details about the color we used.  I copied and sent all the information from the sticker on the paint can.  She wrote yesterday to say that she'd taken my email with her to the store, had a can mixed to specs and it's perfect!  Yay!! 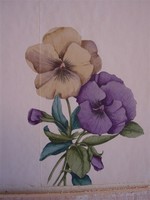 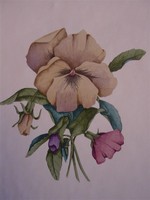 *I meant to tell this story at Christmas, but now's as good a time as any.  Quite a few years ago, I was at an auction with Mom and my sister Sharon.  I must have been distracted because by the time I realized that a beautiful, half-yard-long pansy print was on the block, Sharon was already bidding on it.  And she won it.  And I pouted and drooled.  Even though it wasn't mine, I think it's the item that made me a bonafide pansy collector.

A few years later, downsizing and preparing for a move from Wisconsin to New Mexico, Sharon decided that she didn't want to take the print with her, but neither did she want to give it up, so she gave it to me for safe-keeping.  Eventually, she landed in Ohio and had room for it, but knowing how much I loved it, she let me keep it a while longer -- with the understanding that I'd (happily/sadly) give it back at any time.  During a trip to the Outer Banks one fall, we planned to stay overnight at her house.  Knowing we were coming, she asked if I'd bring the print.  Oh, I was very sad to give it up, but it was time; we had a few good years together.

All my siblings were home for Christmas (festivities at my house!) and another sister, Karen, had my name that year.  When I opened her gift, I immediately turned, in complete and utter disbelief, to Sharon and said, "Thank you," then, rather confused, to Karen.  On my lap was the pansy print I'd just delivered to Ohio.  Karen had bought it from Sharon to give to me.  It was one of the best gifts I ever received -- so completely from the heart -- and like a gift from both of them!  Sharon says that that's the best gift you can give anybody -- something that you have that you know would make someone else happy.  I think she's angling to have it re-gifted one of these years...

If you've stuck in there this long, then run right over to see Celia.  She is a funny, funny lady and sure makes me look forward (even more) to International Pajama Day II.

Your pansies look great, you guys have done a great job.

LOVE the pansies. They are one of my favorite flowers. So old fashioned.

And, the picture with Duncan in it? How cute is he blinking at you? I just want to give that kitty a hug! Would he let me?

I know that they sell ceramic tile paint - and we have seen evidence that DH is good with sketching ..... I just wonder, if it comes out badly, will the paint come off of the tile without damaging it?

ps. love the pansy print & story. I love pansies too, but don't collect them except in my garden.

The pansy print story had me in tears and then...what a bonus! Thanks for sending people my way.