A little less puffin'
The house that Ai built 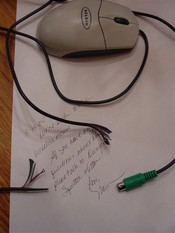 Late Sunday night, I was doing some computerizing.  Our computer arrangement is functional, but it's less than ideal.  It's set up in such a way that Duncan and I were playing tug-o-war with the mouse through a small hole in the desk.  I couldn't actually see him, though, so when the tugging stopped, I figured he'd moved on to more interesting things.  A short while later, I moved the mouse, but the cursor didn't respond and when I gave the mouse a tug, there was little resistance.  Okay, there was no resistance and I pulled a chewed-off cord through the hole!

Duncan is fine.  We've had a fair number of critters through the years, and none have ever done anything like this!  Thankfully, I had a spare mouse; it's wireless, which we like, but so very jumpy that's it's been relegated to back-up status.  You position the cursor right where you want it, you're about to click, and it takes a sudden leap of about 3 inches to the left; Mdd hates it for games.  DH, of course, is going to try to splice the severed one.  I will be adding "mouse" to my shopping list.

I just bought some yarn -- just now, as I signed on to Typepad.  They have that cool list of updated blogs and photo albums and I spotted an album called, Wendolene's Clearance Sale on Gromit Knits!  There's other stuff, too, really cool stuff -- go see (but the sage green Mission Falls Cotton is mine!).

I made a little progress on Ai's Goldie sweater.  Only a few rows to go before I'll be joining the pocket flap to the rest of the front and then it might be picture worthy!  I thought about Opptuna all day yesterday...  I'm hoping to start again today.

The last time I smoked in my car was yesterday morning.  I felt a little panicky this morning, at about the spot that I'd normally light up the last of my on-the-way cigarettes, so I opened the window -- wide -- and got a good, kinda cold, fresh air blast!

I'm very thankful for two changes in the marketplace that will, I think, help me remain quit.  One is that cigarettes are no longer displayed and available at the end of an aisle at the grocery store.  I didn't have the will, and maybe still don't, the last time I quit to keep my hand from reaching out and throwing a pack into the cart with the bananas.  Too damn easy.  I'm also thankful for the pay-at-the-pump option at most gas stations.  While I prefer to pay for my gas in cash, it's also the #1 place that I buy cigarettes.  I'll be paying at the pump for a while.

This morning, on my way out the door, I told DH that tomorrow is the day I'll be buying The Pill... oops, little slip there... I mean, The Patch.  The Patch!!

Here in WA state, you can only buy cigs at the customer service booths at the grocery store.

I know you can do it!
Wow, is Duncan still a bit mad about his special surgery? LOL

You go grrl! I have faith in you and Ann. You'll help each other through it.

Huh. We have a wireless mouse and I love it. Do you have a Logitech?

I know this probably isn't the problem with your mouse but ours jumps all around unless it's on a solid color. The different color and pictures it sits on makes it jump like crazy. Stay strong with your quitting-it's so worth it. Jane

I sympathize! My camera cable has a splint on it where Jasper started chewing the cable. He also chewed through the cable for the microphone that I used with a ham radio program.
Come to think of it, I think he chewed my mouse cable through too!

Ohhh, I am so behind reading - big hairy conga-rats to you for your posts about quitting. I especially love how sensible your separation of activities is - tooo cool. I need to put that to practice as I wean myself off of coffee.

I guess you won the tug of war! I have a wireless mouse too, and I have the same problem the second the batteries start running low. Did you try popping a fresh set of batteries in or re-charging them? Pain in the butt!

Good for you for not having a cigarette! Keep it up. Just concentrate on getting through each day! You're doing great!