Wrap your head 'round this!
What's the meaning of this?

Just when you think you know...

There's a CFWE (Creative & Fun Woman EXTRAordinaire) in our midst -- go read all about it! Congratulations, Ann!!  There's a new St. Brigid fresh off the needles, too!  Go have a look-see at Kim's gorgeous new sweater!

Just when you think you might be getting a handle on your kids, they go and show you that you know NOTHIN'! 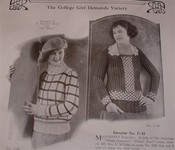 I showed Mdd the sweater that I posted yesterday and she liked it.  What she liked even better, though, were the two sweaters on the facing page!  Really, you could blow me over with a feather.  Never in a million years would I have guessed that she'd have even a remote interest in these.  She was actually torn over which she liked best, and then decided it was the turtleneck -- it's shown in color on the cover, too.  She'd like different colors, of course, and she'd like me to hurry up so she can wear it while it's still winter.  Oy.

I attached a pic of the finished Miss Dashwood to an email I sent my baby sister yesterday.  I told her that it's hers if she has a girl.  Here is her reply:

BEAUTIFUL HAT!  I LOVE IT.  So if I don't have a girl just save it till I do cuz I'll keep trying and it will be all your fault because you made such a great hat.

I had time to make a couple of stops before meeting Ai to look at a dress.  One was at Hobby Lobby where I purchased some Sugar 'n Cream in two variegated colorways (pinks and blues, of course) to play around with a couple of other versions of that hat...  sometime...

She's not the only one in birthday mode -- Kt (a certifiable shoe freak) sent a link to some fabulous shoes on anthropologie's sale site, just a little hint (hoping it wasn't too early for birthday hints).  They're Lagos flats and they only have three remaining in size 11 (item 45182 if that's your size, cuz it isn't Kate's).  Craptastic.  Birthday season is fast approaching -- all three grrs within 9 days next month.

Here's one reason why Mickey doesn't show up in the blog too often.  She is way too interested in sniffing the camera or licking the left-over Cheetos dust off your fingers!  Speaking of Cheetos -- which I love (Puffs for me, please) -- somewhere in blogland recently, I read a lament about how eating Cheetos and knitting can't be done at the same time.  Someone worthy of nomination to the Cheetos Hall of Fame (I don't know who) left a comment that they have found a way to do it -- by stabbing them with a toothpick!  Don't you just love that??

Happy weekend!  May you find a way to do the things you love while knitting -- yay, La!  (Don't mention anything about the Cheetos to Jen, though, 'kay?  Now's not the time...)

Have a happy week-end Vicki!

I love those vintage sweater patterns. What a find. Mickey's a real cutie, and looks like she's heading right for the camera! Congratulations on the 4.0 report card, that's awesome...and three birthdays in 9 days...I bet that's a busy time for you!

So what does that say about you and your hubby? THREE birthdays in nine days? What were you doing the REST of the year?!?! ;-)

Those shoes are way cool. I don't know if I'd ever be able to pull them off (I'm a comfy Merrell girl myself) but definitely stylin'. She wants them in the red right?

Go Ali! Nice picks Maddy! Your girls definitely have good taste - must of gotten it from their mom....

I dig those groovy vintage sweaters, especially the cardigan. Mickey is the cuteset little thing!

You could try calling stores and seeing if they have other sizes in stock of those shoes (and there are now only 2 pair in stock...as I can wear some 11's and they are CUTE - I had to try...)

I love those vintage sweaters, your girls have great taste.
3 Birthdays in 9 days, that is not good planning Vicki.
My cousin is still holding a girl baby hat that I never got to have, after 3 boys there was no way I was trying anymore!
Have a great weekend.

I had to smile at the reference to anthropologie...my daughter loves that store too...for me, the shoes are about the only thing I could get to fit me in there...heh.

I guess all dogs love Cheetos...and just about any other kind of human food. Mine is always begging for whatever she thinks we have...even the cats have started to do that now...

Three birthdays in a row? I don't know how you handle that...ours are thankfully all spread out throughout the year.

You have a great weekend too...and if you figure out how I can read a mystery and knit at the same time...let me know!

Quick! Make a boy hat so she will get one either way! Kids are so funny in what they like. Have a great weekend!

All 3 girls within 9 days--wow! So 9 months prior is your anniversary or something, right?;-) I love Anthropologie, your daughter has excellent taste. I so enjoy hearing about them, as usual, and imagining what my two will be like as teens.

Hi Vicki...That Cheetos comment was left on my Superbowl Sunday post by someone! My favorite snack of all time is Cheetos and a Diet Pepsi...puffs for me, too. I have been known to go to the corner store in my pajamas when I get a craving! Such great vintage sweaters! Are you going to knit one for her?
Have a great weekend, and thanks for the kind words on my finished Salina!

Problem solved! Why didn't I think of that?!?!?! I'm going out right now and getting some toothpicks!
BTW, love your blog!

YOU HAVE A BEAG?!!!
We have one too, her name is Lily and she does the same sniff sniff lick the camera thing too! They are such comediennes.

Wow, lots of b-days all together, good luck.