What's the meaning of this?
Imagine how the world could be...

I didn't actually do much knitting over the weekend, but I saw some at the movies.  I know I'm not the only one who notices knitters and knitting at the movies!  Mdd and I went to see Finding Neverland.  Right off the bat, I noticed the boys' tams, very cute 2- or 3-color tams.  I really loved Kate's tam-like hat, later in the movie.  I also saw a sweater that I liked.  All in all, I enjoyed the movie much more than I thought I would.  The boys just melted my heart.  I think I'm a lot like young Peter. 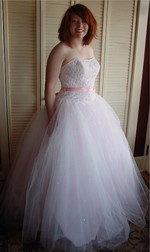 I did go shopping.  Ai had this dress on hold and we had to pick it up on Saturday or risk losing it.  As it was, all the others in this style were sold by the time we got there.  Apparently, my charge account at this particular department store expired some time ago, so I opened another in order to save 15% -- in this case, it isn't chump change!  Since I saved 15% on any other purchase that day, it was time to replenish perfume.  And I found a new jacket -- Jones New York, chocolate brown, very similar to what I've been wearing the past few years (also JNY).  It was on clearance -- a $150 jacket marked down to $29.99 and 15% off of that!  I got my current jacket on sale, too, I'm sure, but not that much!!  Woo.  I don't really like shopping all that much, but this kind of stuff could change all that!

I did work on Ai's Goldie sweater -- I've probably got about six inches and the back will be finished.  Last night, I cast on some baby blue variegated Sugar & Cream to play around with the Mister Dashwood ideas I've had (picture tomorrow).  I thought my mods to the brim might still be too ruffly and girly, but Ai said that her baby boy would wear it, if she had a baby boy.  Let's not go there, okay?

In other news, not only did I go to the grocery store yesterday, I also made supper!  Hm, yeah, it's been a while.

Thanks for all the responses to my Saturday morning query!

That dress is lovely! Ali looks beautiful in it!

Just make sure she's home by midnight...don't want the carriage turning into a pumpkin or anything. The dress is almost as pretty as the smile on her face. :-) Kudos on the purchases. I hate shopping - money off always helps though....

What a beautiful dress.
Three cheers for cheap clothes!
Aw man, now I should think about dinner...

Ali looks like an angel!
What a lucky shopper you are...I'm coming with you next time I need something!

Ali looks like a fairy princess, what a fab dress.
Great bargains on your other shopping, well done.

I was thinking the same, you're a shopping diva! Love the dress. It looks truly magical.

A dress truly fit for a princess! Isn't it amazing that somehow we find a way to get these incredible dresses for our girls..........and buy bargains for ourselves..LOL.

I can't wait to see pictures of Prom Night!!!

Wow, gorgeous! She has such a great mom. (Loved the story about the knitting. I have started noticing people's sweaters!)

Love the dress. Have you see the film of 'I Capture the Castle'? As the book is better, the main reason for watching the film are the beautiful replica 1930s vintage knits. I was just drooling the whole way through despite the nerdy love interest - the knits did it for me!

She's glowing in that dress.

That dress makes me wish I'd liked dressing up in high school. ;)

You look like you're living your fantasy. Both you and the dress are beautiful.

She looks breathtaking! You must be very proud and she's going to have such great memories of prom!

Caught my breath on that one. Ali looks lovely!

WOW! She looks beautiful! I can't believe that is a prom dress.

Oh my goodness, Ali looks like a princess! What a beautiful dress she picked out. Classic.