Cat and mouse
Wearin' of the Green

The house that Ai built 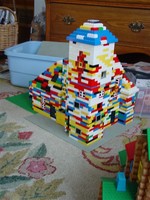 This is actually the second house that Ai built this week.  The first one was all white and quite traditional and stately; this one is much more whimsical.  As you can see, there's still plenty of building material.  Mdd's also been building, and you can see the corner of her Lincoln Log house -- she built a little dog house, too.

I like it that my "kids" still play.  In the midst of this building boom, one of them even suggested that we need more Legos.  (Is there such a thing as too many Legos?)  I know that my kids will always be my kids, I'll always think of them as kids, but I look at my house-building daughter and realize that in less than a month we'll be rolling the birthday odometer.  She's going to be a full-fledged, legal, capital-Adult.  Never mind that Kt will be commencing her third year as such.  Ack, even Mdd, the only one I can still technically think of as a kid,  is a growing, changing teenager who used to hate shopping, in a very kid-like fashion, but who I'll be picking up from school today, the second time in the last couple of weeks, to go shopping.

There are other cool mothers (and in one of the coolest moves ever, a published author, too!) feeling pangs, too.  (I'm not much of a partier -- I don't go to many and I don't have many, but Celia's party posts make me want to change all that!)

There's Goldie on the left, Opptuna on the right.  I took two tries to join Goldie's pocket flap to the front; I'm walking down the middle of the road with this one.  In a move to get out of traffic, I started a sleeve for Opptuna on larger needles and I like it much, much better!  The sleeve is at top compared to the back on the bottom, which was done on smaller needles and is awaiting its third and final frogging.  I may have one more increase row on that sleeve, and then it's just a few more inches, I'm sure, before it's finished!  This is pretty mindless knitting -- a simple twisted rib pattern.  I go back and forth about what I should be knitting right now -- something mindless because I'm finding it hard to concentrate, or something complicated so I have something else to concentrate on!

One of the things I hope to do today is find a place for this.  It's my $2 pansy print -- looking like a million bucks!  DH had some maroon matboard, I had the old frame, we bought some glass and made a picture!  These are the two main "pansy walls" downstairs.  Please focus on the pictures and ignore the rest (thank God dust doesn't photograph well), including any pictures that may be

crooked and unfilled, unpainted holes in the plaster.  (Taking care of those could be a full-time job 'round here.) Time for a re-do so the new kid fits in.

Maybe I'll vacuum and dust, too, while Ann works her Lord of the Nonsmoking Webring magic and we both try not to think about smoking, or even about thinking about having a cigarette.  She's been going out for breakfast, hearing really fabulous stories that she won't share, and cleaning, I'll be cleaning, pounding nails into walls, creating dust (which will need to be cleaned up) and more holes in the plaster (which will need to be patched and painted).  Maybe I'll go out for lunch.  I've been very, very good, smoking only 10-11 yesterday, which is exactly half of what I blew into thin air last week at this time.  It's hard... and it's a piece of cake.  I can put it off and put it off, but I still know that they're in my pocket and I'll eventually have one.  On Friday, they won't be.  Part of me thinks I just shouldn't even wait 'til Friday, but another part thinks that all this thinking and awareness, cutting back, planning, etc, is good.

I haven't been very good or very consistent about replying to emails and comments.  I can't guarantee that I will; it's mostly a concentration thing.  Please know that I am deeply touched by each and every one.  No lie, it's not just hormones or nicotine withdrawal, I'm one of the biggest babies in the whole world.  I smile through tears while reading every single encouraging word.  Thank you.

Update:  She did it!  Ann is the proud mama of the Cold Turkey Knitters -- a webring for knitters who are also quitters.  Like Ann and me.  Look for the turkey in my sidebar, go visit Ann, and then sign up -- we don't want to be lonely!!

Your pansy pictures are all lovely.
I love the lego houses, my boys still play with lego, though they are currently not too happy because I colour co-ordinated it all into seperate boxes! I know, I know I really have nothing better to do with my time!!
Keep up the good work.

Our boy/man had a lego blitz with his friends during the last year of high school. It was building mania at our house for weeks and weeks. They even gave each other Lego sets for Christmas. I don't think they'll ever get tired of them.

The pansy walls are great - your print will fit right in! I think you're right about tapering off. I think it's easier on your body than cold turkey. And thanks for the mention, Vicki. You're welcome at my party any time.

I love those Lego Houses!!

I am a lame-ass! I set up that web-ring and then my site was failed for not having the proper code installed!! I got it all fixed and we are up and running! Yay for us Vicki --- I know we can do this and that it's worth doing!

The webring is a great idea--I'm sure there are other folks out there who could use some support!

I love the lego houses, too! You know, I've been eyeing the Harry Potter Lego sets lately...

I love legos.. we have a lego train set! You should bring your girls to the Mall of America sometime and visit the Lego store (or maybe there's one closer...). Also, there's a Legoland in San Diego that was a lot of fun to visit!

You go, girl! You can do this, Vicki! Concentrate on the goal - it'll be hard but you can do it! Imagine all the extra stash money!
My sister took all my lego and gave it to her kids. I still miss it sometimes and I am getting close to having a significant birthday!
I love the colours of opptuna! :-)

Love the Lego house!! I showed the picture to my boys - they immediatley pulled the lego box out and got to work...it was all ships (think Star Wars) and weapons for them, then a massive chase and the inevitable fire fight. Boys!
Beautiful pansy pictures!!
Can't wait to see Goldie all done and on your beautiful girl!!

I like legos. Unless I step on one with just socks on.

That lego house is awesome! And no, you can never have too many of them. The pansy picture looks wonderful with the maroon matt. I love the idea of a wall full of pansies. You must go stand in front of that wall in the midst of winter and dream of the spring!