Whad'Ya Know?
Wrap your head 'round this! 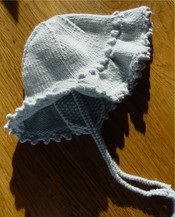 It's very pretty, but it isn't the same without an adorable model.  Miss Dashwood was still drying out last night after her soak.  I used one of my sister's bowls for blocking the crown (it was perfect!), but it was still damp so I unpinned it and left it to dry overnight.  I quickly sewed it together this morning -- I haven't woven in the ends and I'm prepared to move the earflaps, and I haven't bought or sewn in the buttons, and I'm not sure I have the earflap/tie placement correct.  The hat really softened up with the washing -- I was a little worried about how stiff it was before.

US 6 circular and double-pointed needles

This was very fun to knit and would make a fabulous baby gift!  I had done a knitted cast-on before, but not a picot edge -- what a gorgeous detail for a baby girl's hat!  The decreases before the bobble row, looking kind of like pleats, is another beautiful detail.  And the bobbles, while I really hate making them, just make the hat!  I got around the horrible bobble chore by slipping the stitches off the needle and pulling the yarn through with a crochet hook to make the stitch.  I employed that method wherever more than two stitches needed to be worked together; I knit much tighter on circs and DPNs than I do on straights.  It's just a beautiful hat and a very nice pattern.  Five stars!

I had to break into a second hank of yarn to do the earflaps and ties -- the hat itself took approximately 100 yards.  Your mileage may vary!  I'm hoping to get a pair of matching baby mitts out of the remainder.  I am seriously contemplating making another Miss Dashwood in a summery cotton and using ribbon for ties.

Here's the start of Goldie for Ali.  The color is really very close to that of St. Brigid, which, yes, I was wearing yesterday*, minus the flecks of color in the Cascade 220.  The Zar One is lofty and springy and while this may look kind of small, it's all pretty stretchy.  I'm totally cabling without a needle on this baby -- very easy on such big needles!  Ali's eyes lit up when she realized what I was working on.

Speaking of Ali...  She hauled me out to the dreaded mall last night to look at (ack!) prom dresses.  We met a friend and her mother, went to three stores, and they tried on lots of dresses (teehee, I tried one on, too!).  Poofy, she wants poofy, but it seems the bigger the poof, the heftier the price.  Her favorite -- and I have to say that it was beautiful and she looked like a princess -- was expensive.  Owie, owie, owie!  I have a big, big problem with spending so much on a dress that's destined to be worn once.  Even if Maddy wore it in a few years -- and she probably won't because we all know that poofy won't be "in" then -- I still have a problem.  I agonized over this last year, too.  Prom is just over a month away, and she's still going to look around while I cross my fingers.

*I'm going someplace different today, so I'll be wearing St. Brigid again!  (In the "Afterglow" comments, Susan told me I could!  Thanks!)

There is no doubt in my mind that you are a fast knitter...LOL...the Miss Dashwood is very lovely...and the new sweater is going to be awesome.

I had to laugh about prom shopping...my daughter is getting in that mode as well...she went to a junior prom last year, and the cost of the dress was staggering (although she was gor-gee-ous)...it was at a different school than her own, so I suggested that she could wear the dress to her own prom this year...that idea didn't fly, to say the least...

;-)
Good luck with the prom shopping! I'll be doing it soon myself...sigh.

Ooh, prom dress shopping sound like fun, though not the price tag bit, I am sure you will come up with something you both like.
Your knitting looks great as always.

The Miss Dashwood is precious. If I get a new niece, I will definitely be making it!

Prom dress shopping. Almost as bad as the actual prom. But don't tell Ali I said that...;-)

If you are able you could always sew the dress yourself. My sister had the same problem with my niece and she's very thrifty ( albeit a great seamstress.) Find the closest pattern to it. That way she gets poofy, you get wallet relief. I wish I had a wee one to make that hat. Ssooo sweet. (btw I didn't realise we titled our posts the same yesterday)

I was going to make the same suggestion as Elizabeth. But I'm not sure a month is enough time to sew something poofy. See what Ali says. I feel for you! My daughter is still only eight, so I have a few years left to go.

What about consignment stores? Or even ebay? My niece is in a sorority in college and is constantly going to formals. She said a lot of the girls buy their dresses on ebay.

The hat is adorable. Too cute.

Ooh Miss Dashwood turned out so sweet and lovely!! I'm eagerly anticipating casting on for the same hat soon. I too was thinking of doing one in cotton... what shall we use? :)

Miss Dashwood is lovely! Good luck with the prom shopping!

Mrs. Dash looks great. :) My favorite prom dress came from a second hand shop. It was black silk with gold embroidery. I rode my bike to the shop and the bag and dress got caught in my spokes on the way home. I flipped off my bike head first. The drycleaning was more expensive than the dress. I loved it. Sigh. Prom.

Believe it or not, I sold my entire set of Walnut Brittney needles 2 years ago to purchase my daughter's prom dress and still had enough money left over to buy another entire set of Birch Brittney's..........and the dress was in the same price range as you are looking at.

I was absolutely stunned to find what people would pay for those needles and fortunately, I actually prefer the birch ones. :-)

I'm glad that I did it........she did look like a princess, and of course, we have 2 others that are young enough behind her that, that fashion will probably be in style again..LOL You can only do what you can do though.....we weren't able to do it for the oldest daughter, however I found her a gorgeous gown in an antique clothing store at a great price....very Great Gatsby era looking, all in satin. It was the perfect dress for her.

I love, love, love Miss Dashwood!!! I could eat it up!

Miss Dashwood is gorgeous! I would make one, but my new grandbaby is going to be a boy. I have had fun making things for him. Those little garments work up so fast. Oh, just wait until you get into the bridal dresses!!!!!!!!!!! Major heart stopper!!!! :)

I hadn't really like the hat as pictured in Knitty but after seeing yours, I'm converted! Adorable!