The lovely Miss
Just when you think you know...

Wrap your head 'round this! 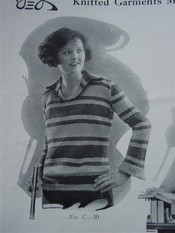 I bought these two issues of Star Needlework Journal, from 1921 and 1923, published by The American Thread Co., yesterday at an antique shop.  I have some old Star spools of thread that were in DH's mother's sewing tin (an old biscuit tin).  There were many issues to choose from, but these are the two that came home.  The issue on the left really caught my eye with this cute sweater pattern.  Is that style not fairly fashionable now, or is it just me?

The terminology is interesting.  "The entire sweater is worked K 1 row, P 1 row."  It uses Silkine Pearl Cotton, size 3, in two colors; no needle size is given.  Even more interesting are the directions for a girl's dress on the same page.  It uses size 5 cotton and "5 bone needles size 4 pointed at both ends.  Cast on 105 sts on two needles and 112 sts on the other two needles, making a total of 434 sts and join."

...a total of 434 sts and join.  And how long do you suppose those "size 4 pointed at both ends" needles would have to be?  Wow, nothing about being careful not to twist, either.  Maybe it's just me (again), but this just leaves me mouth agape. 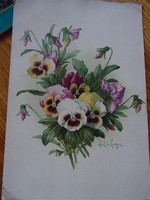 Here's my other "score" -- another Paul de Longpre pansy print.  I can't believe it was only $2.  I need a mat and glass, but have a frame to fit it, even!  There were lots of other things that caught my eye, but I'm more budget-minded than usual with that prom dress thing on my mind.

Meeting Ali later today to see another dress or two...

Duncan and Mickey caught some rays yesterday.  They get along so well and it's fun to watch them play together!

At last , a photo of your adorable beagle girl! I am so fond of hounds. I have some old wooden spools from my grandmother as well. They still have thread on them. I was thinking of framing them in a row in a shadow box. Great finds, again! You either have a good eye or are one lucky shopper.

Love the pattern! It is totally fashionable right now - i.e. all my clothes look like that. Love the Johnny Collar and the flared sleeves. I hope you make it. In fact, I was looking for a pattern like that not too long ago.

That vintage sweater is too cute! Would you be terribly offended if I wrote a pattern up for it and sold it on my blog? I've got a bunch of Jo Sharp yarn in light-and dark shades of rust; not enough of either to make a ful sweater, but I think this would fit the bill.

Good morning!!! You have great luck shopping...one of these days you're going to find Aran Knitting tucked away somewhere for $15.00!

Thanks for the picture of the beagle doggie and the kitten...how adorable...when I left for work this morning my cats and dog were all trying to find patches of sunlight to lie in...but I'm afraid they won't share, like your two did.

Have a look at this link from the new Rowan 37. Familiar isn't it!
http://www.knitrowan.com/html/magazines_slide_show.asp?productCode=ZM37&serial=57&slideSerial=454

Eek, the thought of 434 stitches on dpn's is enough to make me go running from the room screaming. I can't even imagine such a thing.

Why hasn't the adorable beagle shown up here more often?

Here, in France, we can get really long double pointed needles. But circulars, on the other hand seem pretty new and innovative!

WOW! And I was complaining sbout casting on 200 sts on a circular last night. That sweater patter should be knitted (the photographed one) it is super stylish.

ps. I agree with everyone else re the knitting pattern

Funny that Rowan pattern - great shopping. Thanks for sharing it all!