Yes! We have no pictures today...
Think up some words

Yes! We have pictures today!

The following is an important announcement that I've been trying to post for days.  In these trying times, I often end up posting something completely different than originally intended (and does it seem that I foaming at the fingertips more than usual?) and forgetting things...  Go see Beth.  She has an appointment in mid-May for a haircut and is donating her shorn tresses to Locks of Love -- AND she's raising the money needed to make that donation into a wig.  She's got a handy-dandy link right on her sidebar.

Opptuna progress -- neck shaping will soon begin.  This sweater looks like each piece was knit in a different colorway!  I even double-checked last night because that last skein is nothing but purple -- all three are Color 37, Lot N2.  The pieces are so small that there's no repetition of color on any single piece, but you can kind of put them "together."  I like it just fine. 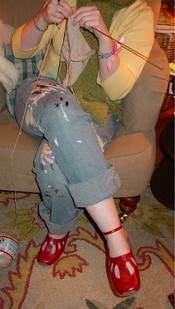 Kt's knitting the Heirloom Bag from Rowan 37.  She's using Aunt Lydia's Denim in the Linen color -- I happened to have a ball of it and she was ready to start.  Now!  She loves the whole satin ribbon 'round the bag part.  I'm not sure about the crochet.  The other day, she said, "I've only ever crocheted one long line."  Hey, hon, that's Single Crochet and it's called a Chain!  I guess we'll cross that bridge when we come to it.  (Am I bad for thinking that we could buy some doilies?)  She's going to make it a little bit deeper and, even so, I think she's nearly finished with the first side.

Aren't those gorgeous birthday shoes?  She's been wearing them constantly.  Yesterday she went to see a friend and he thought she was nuts when, after getting out of her car and plotting her course, she hesitated -- better to walk through the snow or the mud?  She chose snow.

I talked with my sister on the phone last night.  That's a big, big trigger for me, but I got through it.  She didn't smoke while we talked, either.  And thanks to Dez's comment here, I bought some mints this morning and I'm taking back my break time.  For anyone considering a quit, the comments left since March 10th are a treasure trove of tips, inspiration and encouragement.  Have I said "Thank You" enough?  I don't think so...

You are doing so well!
Love your daughters shoes....I want a pair!

I love your Opptuna! Now if only it came in adult sizes ;).

Congrats on staying strong. I quit smoking 7(!) years ago with the aid of zyban. One day you will look back and it will have been 7 years too. Keep up the great work!

If I had shoes like that and had to walk through mud or snow, I'd ask someone for a piggyback!

You're doing fabulous - almost as fabulous as those shoes!

(By the way, I love Dez's idea about scheduling breaks.)

I love that bag...whenever I see the Rowan ad, I covet it. Hey Vicki, I just bought a huge lot of doilies at the auction...would your daughter want a couple? If you send me the size of the bag, I'd be glad to ship a couple your way.

Love the shoes and the sweater and I am so proud of you for keeping on and making yourself successful. Way to go Vicki!

those shoes are terrific --- wise move with the snow decision!

Thanks so much for the endorsement! Frankly, I've been needing a little publicity. Things are going slow, but I'm confident; I have almost two months to go. Today, March 23, I have 52 days to go. Whoopee!!!

Keep up the good work Vicki! As a non-smoker who watched a smoker quit, it is one of the hardest things I have ever watched someone battle. You will be so much healthier, food will taste so much better, and you're sense of smell will be stronger too (just in time for Spring and all those lovely flowers about to bloom). Good for you for recognizing triggers, and finding a way to get through those moments. you're doing extremely well! Give yourself a pat on the back!

I love those red shoes, so sweet and sexy!

Need. Shoes. Now! Would you mind giving the maker?

Can't get those adorable shoes muddy--snow was a better choice! They are Anthropologie, right?

I used that same color of Silk Garden for Clapotis and I had a skein that was almost all purple, too. It's a gorgeous color, and I'm not just saying it because I wore that Clapotis today! Looking at your Opptuna has inspired me to dig mine out and make some progress.