I'm not myself today...
My weekend with Lizzie, Joycie & Lily

There's not much knitting in this post because I spent most of my time last night trying to stay on task with Turbo Tax (not Bloglines -- much).  As of about 10:30 last night, they're done.  Done!  Someone else is doing that job next time.  I did knit -- ho hum, sleeves.  There's a chance that they'll get finished today. 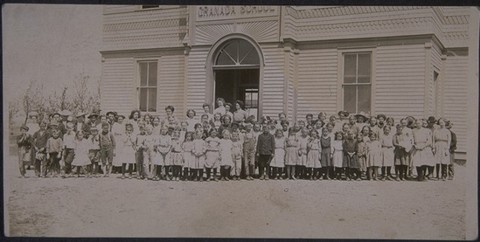 Ann, descended from a long line of teachers, wrote about her teaching gig yesterday, and about her grandma who was a teacher and who taught her to knit.  We chuckle frequently about interests and things that we have in common.  This is one.  My grandma was a teacher, too, as was her mother.

Great grandma's in the picture up there -- her name was Mary Naomi, but she was called "Mayme."  I think she's the one standing right in front of the door trim on the left.  It says, "Granada School," and I'm 99.9% sure that it's somewhere in southern Minnesota, c. 1910. 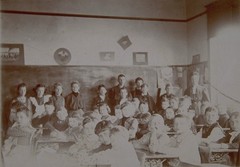 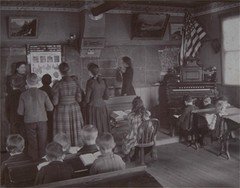 The photo at top is likely Mayme's classroom in the same school.  The little boy just to the left of center in the other photo is my great grandpa, Clifford, in his Brooklyn, Iowa, schoolhouse, c. 1900.  I think he was in about third grade; his younger brother is sitting up in the row by the organ.  These pictures fascinate me to no end -- the faces, hair, clothing, classroom decor, furniture, accoutrements of education.  In Brooklyn, there's a group of older kids studying a chart of internal organs; the girl at the chalkboard is drawing a map of Iowa and surrounding states; in the top right corner of the chalkboard is the "Roll of Honor" on which appears the names of both great grandpa and his brother.

Cliff, a railroad employee in Iowa, and Mayme, a teacher in Minnesota, eventually got married and settled as farmers in Wisconsin.  That's Mayme on the right, within a few years (either way) of marrying, I would say.  Would you look at those hats?  Lordy, lordy, the attendees of a recent royal wedding had nothin' on these ladies!!  There's even a big ol' feather!

I'm excited about my classes this weekend at the Spring Midwest Master's Seminar!  I'm so nervous and excited that I have butterflies.  For my classes, the teachers will be Lizbeth Upitis, Joyce Williams, and Lily Chin.  I suspect I'll be having Latvian Mitten Dreams tomorrow night, morphing into Latvian Finishing Techniques Dreams by Sunday.  Stay tuned.  Y'all have a good weekend, too!

OOhhhoooohhh! Have fun Vicki...sure hope the classes are everything you desire...

take lots of pictures, too, if you can...

Thanks for the pictures...my grandmother gave me lots of those too...her sister was a teacher in an one room schoolhouse...

great pictures Vicki! I love looking at old photos as well --- those hats look like they weigh 5 lbs. apiece! Have a great time this weekend and a hearty congrats on the first smoke free month!!!

I love the pictures. I can't believe people used to really wear hats that big!

I'm more envious of your classes than of the MWSF!!!

Smith did our taxes and that's what I'm bitter about...sigh.

I love the photographs!

Have fun this weekend...

Great post - I love the pictures. I'm a teacher, too!
I married a CPA - hate tax season, love having our taxes taken care of, love April 15!!!

Love the pic's. I'm always grateful when looking at old pics there isn't such a thing as 'smell-o-vision'. I've got issues with B.O..

Have tons of fun at your classes!

Hope your classes are FABULOUS!

I adore those pictures! It's so incredible to see how different every little thing was 100 years ago. And those hats...what can I say!

I can't wait to hear about the Midwest Masters. I would have loved to have taken a class by Lisbeth, but we can't really afford any classes for me right now.

As it turned out, I got a lot of outside work done yesterday (and will today) with the beautiful weather. This is good, too, because next weekend I'm off to an all weekend union meeting - in LaCrosse.

Let us know about the classes!

Vicki...what a great history! Don't you just love old photos? I buy them up at flea markets just to give myself an ancestry! (My family didn't really save momentos) What treasures.
And, congratulations on your cold-turkey! Very Cool, and I am so proud of you...have a blast at your seminar!