Wrap it up already! 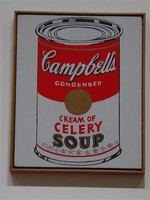 On Saturday, DH and I spent five hours at MoMA -- and that was pretty much flying through, no dilly-dallying.  I would have loved the Cezanne and Pissarro show, but it was members only that day.  We did enjoy Friedlander's work.  I have a soft spot for Op Art and Pop Art, and I especially enjoyed the design collection.  We took a break and had a snack on the third floor patio where, naturally, the chocolate tart is served with flair.

When I first met DH, the thought of his favorite lunchtime sandwich accompaniment left me aghast -- who in their right mind eats Cream of Celery soup as SOUP??  The feeling was mutual, however, but with Cream of Mushroom as one of my favorites.  Apparently, DH is quite influential in the soup department at our house, as all three grrs count Cream of Celery soup as a favorite, but shudder at the thought of Cream of Mushroom.  Anyway, this is the only soup can I photographed, for obvious reasons. 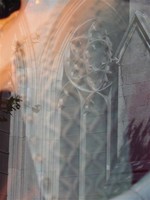 What I really wanted to capture in these photographs was the sweater -- it's cabled and quite nice -- but I got so much more and I really like them.  I don't know which church is reflected in the windows, and don't even know which store it was!

Here are the porcelain, bunches-of-cherries buttons from Tender Buttons for my fruit sweater.  Aren't they perfect?  The current placement of buttons is not quite right, so there's this alignment problem with the checkerboard -- I'm going to fix that!

When the grrs were in the room on Thursday, I'd shown them the buttons and the sweater -- they were all pretty impressed with my sister's work.  Katy said, with admiration, "That's not duplicate stitch!"  And when I repeated that statement to my sister, with proper reverence, it meant absolutely nothing to her -- she has no clue what duplicate stitch even is!  This was one of her first color projects.  Lauren and I were hard-pressed to find an end sticking out -- and this is slippery, mercerized cotton.  Anyway, my sister isn't really knitting much these days because of carpal tunnel and other physical issues, but it was fun to share and make her head big! 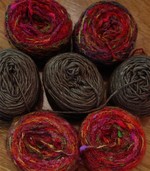 Several weeks ago, I bought the Noro Cash Iroha that I needed for Williamsro when my LYS had a sale.  I bought a little more than I needed (I bought all they had of that color) because I might want a little more length.  The Noro Blossom has been much harder to find -- apparently, it's not carried by very many shops, especially not the ones we went to in NYC because I looked at every single one!  If they did have it, they only had a few skeins.  So, at our very last shop stop on Friday, The Point, I was elated to find four skeins in the same color/dye lot and after consulting with my fellow knitters, we decided that it would work.  I think I'll be making a statement, but it might work.  I wound 'em into balls last night and will see...  Oh yeah, I was so excited to find more than two hanks of this yarn that it completely slipped my mind that I needed FIVE.  Duh.

I had my other purchases out last night, too.  Some of it is PRIZE YARN!  I think that'll make a nice holiday post, don't you?  I won't have fireworks, but I'll have yarn!  Have a great holiday weekend -- see you on the Fourth!

From the looks of the photo, I bet the store window is Saks Fifth Avenue (on 5th ave!) with St. Patrick's Cathedral reflected in the windows.

How funny, I just pulled out the Williamsro pattern the other day--it's why I bought the pattern book! I'm also loving the photos from your trip. I'm living vicariously through all of you traveling East Coast knitters!

You found some Blossom!! I'm so excited for you and love those colors.

That is a pretty church in that cable window. :) Thanks for sharing your trip with us.

glad you found that yarn!!

That cabled sweater is wonderful and the reflection of the church in the second picture is truly neat! I love the effect!

Hmmm........yarn is sooooooo much better than fireworks!