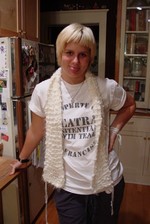 I'm just tickled pink that y'all enjoyed the photo review late last week.  I wonder when Standard changed over to Amoco?  That's an old, old sign; the station itself (made of rocks, did you notice?) is now a friendly (I'm assuming) neighborhood tavern in downtown Butternut, WI, as are the grain elevator and the mural.  "Bob's Boob Tube" and the Park movie house are both located down the road a piece in Park Falls -- where my educational career was kicked off, having spent my first few months of kindergarten there (the school was converted to City Hall a number of years ago).

Mother Nature -- what can I say?  Well, #1, thank goodness for Kt's zoom lens, and #2, the hummers were darn close even without the zoom and comfortable enough even with all the activity that they'd alight on the wire from which the feeder was suspended for a few minutes at a time.  The sky was gorgeous all weekend, and those are just a few of the many loons we saw on the water.

The well-turned heel of the beautiful sock that I loved and had worked on all that weekend?  Gone.  I just discovered on Wednesday night that the sock was too small, so now I'm back to two green & white Lorna's Laces yarn cakes.

That left a bit of a dilemma as to what to bring with me last weekend, as I surely couldn't keep working an ill-fitting sock and I was pretty sure that a time-out was in order for the sock and that I would not be re-starting this weekend.  That led to my packing my ball winder (but no swift) along with a few hanks of Cash Iroha that still need to be wound for Williamsro, along with the pattern and needles; the sportweight yarn called "Pansy" that I bought last weekend from Red Barn Farm and the pattern for Caryl's Kerchief that I've had in mind for it; the socks (just in case I was wrong about the time-out/re-starting thing); Tivoli (which travels everywhere with the socks); and numerous books to peruse.  My 8-year-old nephew was more than happy to help with yarn-winding operations!

In the comments, Emily (don't forget to check out Kepler while you're there -- it's fabulous!) wondered where the ubiquitous splashing muskie picture was and yesterday I saw the mother of all muskies -- 3D and huge all along the front of a sporting goods store in Chetek (I think that's what it was, I can really only imagine because I was kind of distracted by the big fish!) -- and I didn't have my camera.  It was a craptastic weekend in that I camera-less ALL weekend.  I needn't tell you that I was actually searching for a yarn shop that I'd heard about when I found the fish...

I didn't find that yarn shop, but there is fibery goodness from other shops and there are pictures!  At right is a ball of Plymouth Sockotta, the only purchase I made at Black Purl in downtown Wausau -- not that I wasn't tempted by more.  They'd just come back from Stitches Midwest and they had lots of unpacking to do!  I have driven around Wausau (about the half-way point to my sister's) for 16 years or so, but have never been downtown -- the 600 block of 3rd Street is quite charming.

Some miles further west is Eau Claire.  There is lots and lots of road construction (which will be terrific once finished) and my detailed map with directions to Yellow Dog Knitting was of little use.  I had to use super powers to find my destination; I think my knitter's secret decoder ring was homing in, actually, since it was through phone & mail from Yellow Dog that DH bought it last Christmas!  (That ring may one day take me to Toronto as I'd have never known about it if it hadn't been for the Harlot's Christmas list.)  As I recall, there was a little hoop-jumping involved in the procuring of that ring, but the service was nothing less than stellar.  I have to say, that's just how it is in person, too.  Dixie and the grrs were delightful and I had a great time visiting and shopping.

We finally found something that Mdd liked!  Among the many shop samples on display at Yellow Dog, she found a soft, fluffy scarf.  While we searched for the yarn, we came across another yarn that she liked a lot and it was suggested that it be paired with some ribbon.  What you see her wearing up there is a scarf made with one strand each of Berroco Softy and Zen held together -- the yardage was quite similar, but she has a lot of Zen left over (can you ever have too much Zen?  Margene?).  It is a dreamy soft scarf!  There are a few things about this that I like:  #1) Mdd loves it.  She started on Friday night and was finished on Saturday.  #2) I believe it's the first thing that she's actually finished -- because she loves it.  #3) It was knit on gorgeous, handmade, birch & black walnut needles.  More on them tomorrow -- and about what's in the bag (if you saw my pic with Dixie on the YD blog).

Welcome Home! Loved all the pictures! Yay for yarns and projects that you love - tell Maddy the scarf rocks.

Sorry about the socks - I'm stalled on the ones I'm making as well.

So glad to see you made it home safely and glad you didn't get lost in the alternate reality of road construction! Now next time you come to visit the Sis come early on a Fri. and join us for "support group" (no explanation needed). Can't wait to see you again!

I only know that because I had to do some research on Standard Oil's charitable giving at work last week. I hadn't ever thought about Standard Oil before, and here it is twice in one week that I've discussed it!

You can never have too much Zen but sometimes you have to look hard for it;-)