Let me off!!
Lunch and shopping

Wednesday is garbage day (recycling every other week).  About half the time, we're scurrying to get the trash cans to the curb as we hear the truck rumbling down the street, and one of those weeks, DH is usually calling after them to stop (I don't ever do that) because we were even a little later than "normal"! 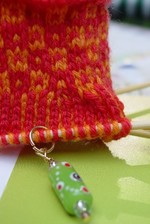 These are the Peek-a-Boo Mittens from Knit Mittens! that I'm making for the baby shower.  I'm using some of the Baby Ull that I bought long ago from Jody and another lovely stitch marker from Susie.  I knit a few rows on this, then a few rows on my sock, a few rows on Tivoli...  There are stripes, but it's the orange yarn playing peek-a-boo!

I used the Baby Ull to make Tanguy, too, and now, with every stitch on these mitts, I'm thinking about Christmas knitting because my brother-in-law wants a Tanguy of his own to coordinate with M*c's.  He'd so wear it, too, and so would at least one of M*c's older brothers.  And then I think about the Weasley sweater that I want to knit for M*c.  I stopped at the library on the way home last night and brought home some books.  I just want a simple baby pullover pattern and will chart my own "M."

Oh my goodness, have you seen THIS?  It's ERIS, the pattern for a v-neck OR cardigan by the designer of ROGUE!  I love it!!  I ran across the link on the Knitty Blog last night, which, for some reason, has only recently made it on my bloglines list, and I didn't hesitate for one single second.  So, yep, I've already printed out!

My mom called last night, "Has Ai changed her mind yet?"  I hadn't talked with her since Sunday.  She's taking me out to lunch today -- to cheer me up, even though I'm not bummed like I was.  Plans did NOT change between my leaving yesterday morning and returning last night, either.  (Thank goodness.)  And really, I think I was more surprised than anything.  Ai's moving out was SO not on my radar -- in my mind, I guess, I figured they'd be leaving IN ORDER.  It's just not her turn yet.

So, I won't actually be attending the above-mentioned baby shower in a couple of weeks because I'll be up at my sister's that weekend for Rummage-O-Rama, our annual blow-out rummage sale.  It think this will be her 15th year as hostess, my 12th or 13th as participant.  I have to start getting stuff packed up and organized today!!

We were always running after the garbage man too - and now my sister does. We, of course, don't have that anymore in the humongous apartment building.

So much knitting! So little time! It's crazy!

Glad Ali's holding to her decision and you're getting some cheering up!

Just remember that some of Ali's space can now be used for yarn storage.

I jumped on Eris, too! It's a great pattern. Change is always hard...especially when we least expect it and more so when it involves those we love.

Ohhhh...Eris is gorgeous! I just love the pullover version.

I wish I had a garbage man to run after...we have to haul ours to the dump. I'd gladly run out every Wednesday morning in PJS and slippers if I could have garabage pick-up...hehe!

Must finish Rogue before I can begin Eris...