What's in the bag?
Instantly recognizable

We've had some recent cooking incidents.  Kt had a craving for chocolate pudding the other day and had it on the grocery list.  The kids are used to instant pudding, because they always liked to have it instantly!  It was cook & serve pudding in the grocery bag, however, and it had to do.  (I have fond memories of that stuff from childhood -- Mom would sometimes sprinkle it with flaked coconut and my favorite part was the extra-chocolatey, skin that would form on top of the pudding as it cooled in the 'fridge.)  As Kt was trying to find room for the bowls, a green pepper fell into one and there's the result -- a chocolate-covered green pepper!

Over the weekend I made brownies -- Betty Crocker (I think) fudgey ones.  I added the eggs, measured out the water and oil, and stirred.  It was so dry, though!  There's no way all the dry ingredients would be absorbed, so I added a teensy bit more water and put it in the oven.  Ten minutes later, I spotted the measuring cup with the oil and water on the counter -- we determined that it was too late to add it and crossed our fingers that they'd turn out somewhat decently.  I don't recommend this trick with any brownie mix, but with this one, it didn't seem to make a difference -- they were moist and tasty and had a lot less fat!  I'll bet I didn't even add half the amount of liquid called for! 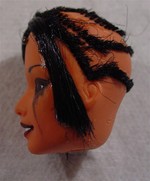 A few years ago, my grrs found a new way to play with Barbies by styling the heads rather radically and adding them to their keychains and the like.  Yesterday, there was a little cleaning spree at my house and someone -- I'm suspecting Ai, but it could be Mdd -- found and made improvements to another.  If it's Ai's, I'm guessing that its new purpose will be as an antenna topper on her car -- she's in the process of painting the hood with a design of her own.  What the hell.  My kids never lose their cars in parking lots. 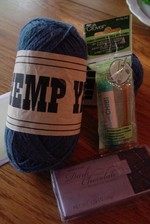 Finally, I've got a new secret pal and there was a package in Monday's mail!  How do you like that?  Two balls of Hemp Yarn -- worsted weight wool/hemp with pretty decent yardage -- and I can't wait to do something with it.  It's not the softest stuff in stash, but I have a feeling that it will soften with use -- that's been the case with my favorite hemp shirt, anyway.  Woo!  I now have a Chibi.  Up 'til now, I think I was the only person in blogland who didn't have one!  There were three Trader Joe's Dark Chocolate candy bars in the package, but you see the only two that remain.  Yum.  Oh, thank you, thank you, Secret Pal!!

I've actually got lots more to blog about, but I'm trying to spread it out.  I've always been very good about blurting out everything in one huge post and then I'm stuck having to pull stuff out of thin air to keep us amused.  So, look for some future words about Clapotis (not mine -- yet) and pictures of Caryl's (hopefully big) Kerchief.  It's my day off and I have tons of stuff to do, not the least of which is go out to lunch with Mom and some friends.  ; )

Grrl, I almost freaked out when I saw the Barbie head! I'm not sure if it was a childhood flash back or what!
You've got a great SP. I've been dying to try hemp yarn and you'll have to keep us posted on how it is.

Oh and have a fun lunch!!

I remember one marathon cookie baking session with my mom. We had been baking all day and the last cookies we had to finish were oatmeal. We couldn't figure out what was up with the batter (it was really loose) but we put them in the oven anyway. We realized (when the whole pan turned into a blob of melted goo) that we had forgotten to add all the flour. What a mess! I'm glad your brownies turned out better than my oatmeal cookies!