Blue, blue, my world is blue

Well, now I've really done it.  "Love Is Blue" ranks right up there with... (oh, I can't even risk thinking of other titles)... on my "Oh, I Hate That Song List" and now it'll be running through my head all day.  Dumb, sappy lyrics paired with sprightly yet mournful music -- GAG, double-GAG because I used to have to play that stupid song on the piano in the day, too.

I'm kind of blue and swirling here... Mdd $tarted high $chool today, Kt'$ leaving for her $chool today, bought book$ for Ai ye$terday, I can't even bear to look at ga$ price$ anymore, the deva$tation of Katrina i$ impo$$ible to fathom, the co$t$ will be $taggering.  It's not about money, and yet it has to be -- the economic ramifications of a bad situation that just gets worse and worse, shortages, problems of availability...  Yeah, I'm blue -- I don't think I'm sinking, but definitely swirling.

It's been a tough week.  Kind of a tough month.  Change is good -- Kt's ready to go, it's time for all three to start school -- but there's always accompanying angst and frustration.  Maybe being grouchy and even having a blow-up is nature's way of transitioning in some sick way.  I could have written Ann's post the other day, except for the presents and not quite so much cleaning -- at least not at my house.  I vacuummed my sister's in record time last weekend when it was learned that Mom was arriving earlier than planned.  Thankfully, it's starting to subside and I'm hoping to find a more even keel soon.  Man, I haven't struggled over cigarettes so much since Quit Week One -- last weekend and early this week have been huge and I tire myself out with the stupidity of attempting to justify why I should smoke.  I know... 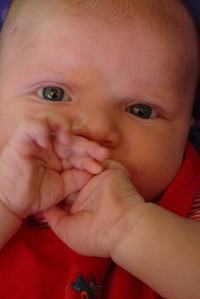 Here's something guaranteed to bring a smile -- for me, anyway.  Forgive me, but he's utterly smoochable. When I look at him, I can't help but be hopeful -- for him and all his diaper-clad cohorts!  (Look at how he's changed!)

In the teensiest bit of knitting news ever, I had the ball winder and swift in action last night, and I've been knitting on the Caryl's Ker/shawl.  I measured off the amount needed for last row/bind off last night and should have enough for a few more repeats.  We're going up north this weekend and perhaps I'll finish it.

Margene and Susan and Norma have all got Katrina-relief things going -- I've been laying low in blogland, but I'm sure there are others.  There's always the Red Cross and Salvation Army.  The Green Bay Packers weren't alone on the plane on their way to their last preseason game in Tennessee -- a number of players live or have family in Louisiana and Mississippi.  It will be a somber game tonight and I expect a lot of hurricane talk, but there is nothing like Packer fans when it comes to supporting their team and rallying when help is needed.  Ask 'em.

I'm sorry it's been so hard - especially with the cigarettes and all. And with Katrina and all the other crap in the world, half the time I don't know whether or not to feel guilty for my own stuff, or wallow in it to forget everything else. Here's hoping EVERYTHING and EVERYONE stabilizes soon.

Hey Vicki,
You hang in there and resist those urges! You've come so far and Mack is reason enough to stay the course. Man, is he cute!!
I've been wanting a swift and ball winder. Any recommendations?

We're all feeling overwhelmed by changes. It seems we have little control at times. Stay strong, be well.

It's a funny time of year all right. Expensive, for sure and unsettled, definitely. I'm glad I'm not the only one feeling at sea. Getting everyone back on schedule this month should help. I hope. it's interesting to see how these waves of energy ( or lack thereof) are so universal. That's one thing blogging has shown me. Do not reach for those 'you know whats'!

Hang in there.....life will quiet down for you once the girls are in a regular routine and you can breathe again. It is much the same there, getting one off to college and the little ones ready for school next week (not a moment too soon).

The economics of this hurricane is going to affect so many people. Up in the North country in the mountains we are very concerned about the rising heating oil prices. There will be another set of victims come winter if these prices don't go down.