It's handled
Make mine chocolate

Changes in attitude, or...

I'm not Norma, my name is Vicki, and that's why this rhodie isn't planted, but instead modeling two finished Williamsro sleeves.  It's songs that come to mind for post titles so often, and so often they're songs that I don't like for one reason or another!  In the case of the first, I like margaritas as much (probably more) than the next knitter, but he stood me up or a concert many years ago and I still haven't yet forgiven him (nor did I ever received a refund from the promoter).  The other song I just hate; at least when I substitute "Norma" for "Julie," it makes me smile.  Anyways, I finished the sleeves last night and immediately cast on for the back.  That will be ripped and restarted this evening as some stitches went wonky on me and I think they need to be shown what's what right from the get-go.

Here's a close-up of the Noro Blossom cuffs.  Some wild colors in there, but I really like it.  And I love the olive-y green of the Noro Cash Iroha body, too.  I predict this will be worn a lot.  When there are certain things in my wardrobe that I go to over and over, I refer to them as part of my uniform.  Williamsro definitely has uniform potential.

This morning, after an early morning date at the farmer's market with Mom, I drove to Fond du Lac and visited The Knitting Room for the first time (they will soon have an internet presence!).  They've been open for three years and it's quite a nice shop.  They're the only "local" source I found for some particular flavors, but I can't divulge anything about that!  And I didn't buy anything except precisely what I went to get!  One thing I was very impressed and quite taken with was the abundance of knitted samples -- mostly hats, bags and scarves, but wonderfully done with great fiber and lots of color.  It was a treat.  It didn't hurt that there was an antique shop right next door.  They had a yarn winder with a clicker, like Norma's, I think, and I even got down on my hands and knees to search every inch of it for a maker's mark.  Nothin'.  It had pretty cool wooden peg construction, though.

Fond du Lac is located at the southern end of Lake Winnebago, the largest lake in the state.  I live at the northern end and originally planned to just drive down on the main highway on the west side of the lake and then back.  Amy Lu left a note about a craft fair she'd be at, representing Bahr Creek Llamas & Fiber Shop, in my neck of the woods -- well, right smack in between our two necks of the woods, anyway!  I thought, "Great, I'll just make a loop around the lake!"  I love the eastern side of the lake.

Well, Amy said that the craft fair was in Kiel.  So Kiel, population 3500, was my destination.  I had a lot of fun going along the lake, then cutting east on county roads that I'd never driven before.  It was an absolutely gorgeous day to be on the road (and gas prices have dropped yet again).  I saw a lot of signs that reminded me to be aware of horse-drawn vehicles (didn't see any, though).  I was very dismayed at the number of house-less farms I passed.  That means only one thing -- what was once a family farm, is no longer.  It's unmistakable, the way the trees are planted around the former building site, often a little group of fruit trees in one corner, and very sad.

Well, all I found in Kiel was a flea market in the city park (one sign I saw had it spelled "flee") and it wasn't half-bad, but no llamas, no fiber, no Amy Lu.  There's a little farm town every 6-12 miles along these highways, though, and I thought maybe Amy Lu was confused.  Maybe she meant the next town -- New Holstein.  New Holstein was celebrating "Cow Fest" today (see above) and had these cow-shaped mylar balloons stuck all over the place.  There was a car show, live music, and numerous vendors.  I gave it the eagle-eye drive-by treatment and was ready to floor it and move on when I saw animals with long necks -- I'm not sure if they were llamas or alpacas, but it made me wonder whether Amy Lu meant to say that she'd be with the animals at a craft fair in someplace-other-than-Kiel.  I found a parking place, bought a Diet Pepsi, found the bathroom, bought some peanut butter cookies from Levi's (there's an Amish bakery vendor at most craft/farmer's markets I've been to -- and yum!), and checked out the long necks, who were only part of a farm animal display, along with a (heh) Holstein calf, some ponies, pigs, you get the picture.  No Amy Lu.

I saw a sign for some goings-on in the next town, but it was vague and I decided to just head home.  Whereupon the kids were all busy and I checked my email and Amy Lu had written this morning to say that it wasn't Kiel, it was Chilton, and isn't a good thing that she found out where to go!  Well, Chilton isn't that far away and it was a gorgeous day and my favorite side of the lake, so I decided to go back.  I'm really glad I did.  The event was the "Fall Food Festival" at the Ledge View Nature Center in Chilton.  I had a nice visit with Amy, met her able and handsome assistant (was it Daniel?) who was doing a weaving demo on the cutest little Baby Wolf loom.  They had a great display with yarn, needles, books, needle felting supplies and samples (Amy showed me how) and books -- I just have to get down to that shop sometime soon. 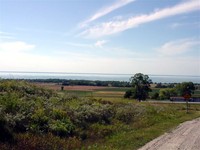 One of the great things I came away with is the 2005 Farm Fresh Atlas of Eastern Wisconsin.  For cryin' out loud, I didn't even know there was such a thing!  I'm anxious to study it and find some new things.  That whole Eating Local thing last month was great, but 'round here, it can be tough.  This "atlas" ought to make it easier.  I took some pics today, mostly out the car window, but this view made me pull over and get out.  Get Out!  God, I love everything about this -- the patchwork farmland, the gorgeous sky, the water.  I wonder if DH would like to move... the house.  I'd have to have my house; I love my house!

I feel better -- good, bright, happy.  So today was nice.

Williamsro is looking wonderful! I can't wait to see it finished!

Glad you had a nice day - it looks like it was beautiful!

OOOOHHHHH!!!! I love it!! Thanks for posting the pics. I can't wait to make one for myself :-) Now when are you going to post the finished pics?? Just kidding! Keep up the good work

I don't know what is more gorgeous --- that view or those sleeves!

and that map thingy sounds great!

Oh Vicki, it looks gorgeous!! I really love the colors!!

I love that color green on Willie. I have uniforms too--as did my mom. :)

Williamsbro is very cool! You have great knitting taste!

How about next weekend you go out and hide somewhere in northeast WI, and I'll come and find you?!? *grin* It was great to see you again! Thanks for playing "Where in WI is Amy Lu"!

(Have you cked out Yarns by Designs spring Master event for 2006? I'm signing up!)

I heard a sharp intake of breath in the room at the words, "Cash Iroha body." I turned around and looked to see who else was there. It was only me. Holy cow, that sounds amazing! It's going to be just beautiful.

Wish I had a rhodie that could grow sleeves as beautiful as yours! Your day out sounds wonderful even if you did have a fair old drive to get where you were supposed to be. Peanut butter cookies just about summed up a perfect day to me!

"Jealous! Jealous, again...." I want my own Williamsro:) Please keep us posted on your progress. And looking forward to you modeling the final results!

Gorgeous stuff all around here! sky, knitting. IT's all good!
:)