The winner is...
Would you like that in checking or savings?

While I've had a few little problems with Typepad, for the most part I love it.  One of my favorite things is the list of recently updated weblogs and photo albums on their home page.  I don't think you even need an account or have to log in to see them.  I have come across many a new blog that way and some (okay, probably most -- I'm a Bloglines subscription junkie, a blog collector) get added to my reading list.  I tweak that list frequently and am nearing 400 subscriptions, mostly knitting.  I think there are some folks -- I don't know how many -- who use my list as home base for their daily reading, so I hesitate to do anything too radical.  Anyway, this morning I stumbled across a photo album on a blog that left my jaw resting on my desk, eyes big as saucers.  Starmore after Starmore after Starmore.  It's in French, but I don't need no stinkin' language with pictures like that!  There are albums for Fair Isle and Norwegian and more -- I'll definitely be exploring in the future (with translation) and encourage you to have a little look-see, too. 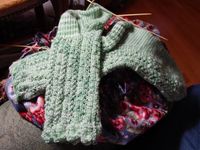 I can't hope to compare today, but I am making progress -- about half-way through the foot of my Socktoberfest socks.  I am so excited to wear these!

I had about three hours of on-and-off knitting time in the out-patient surgery waiting room yesterday, waiting for DH's colonoscopy to be finished.  Poor guy was a little wild-eyed and jittery from lack of food and drink and as the clock approached 10:00, his scheduled time, and he was still fully clothed in the waiting room, he had to go inquire.  That set off a little nurse tizzy and they finally decided, I guess, that the patients should all be informed that the doc was running late -- by about an hour.  They took DH back, anyway, and got him started on the IV, even gave him a little glass of water.  In the end, he got a "clean" bill of health and took such a long nap yesterday afternoon that I really didn't have to do much nursing.

So, anyway, I was waiting with DH, sitting and knitting, and a nurse passed by and asked if I knit my shawl -- I was wearing Caryl's Kershawl.  So we talked about the pattern, the yarn, my other shawl, the sock I was knitting, the sock she was knitting (but recently frogged altogether when it came out of her bag sans needles, but don't tell her sock-knitting co-worker), and mentioned at least three LYSs by name -- all in the span of about three minutes -- and then, darn it all, she had to get back to work!  There was a fun fur scarf being knit in the waiting room, also, and I do believe I spotted a sweater in project bag, but didn't see it being worked.  What really surprised me was how many people knew other people in the waiting room -- I swear, I witnessed no fewer than a half-dozen how've-you-been quickie greets.  I didn't know a soul. 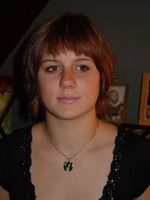 I know this person, but keep having to do double-takes.  While this probably isn't a huge departure from her natural color (see those eyebrows? untouched), it is quite a change from the near-platinum blonde who's been living in my house the last few months.  The grrs keep talking about doing my hair -- we've had the box for months!  I'm kind of a scaredy-cat when it comes to coloring my hair.

What am I looking forward to this weekend?  A M*c attack -- with teeth!  At 4-1/2 months, he's cut his first tooth!  He's been eating a little pureed squash recently, too, which he likes much more than rice cereal.  I can't wait to see him!

Thanks for the link -- her knitting is amazing. Hair color is my one indulgence (besides yarn, that is.) You can always recolor if you are not happy. But, only do it if you want to. No pressure :)

The girls' coloring experiences have looked great so I'd go for it!

Holy crap that's a photo album(s)! Thanks for the link.

Maddy's hair looks great! I much prefer the darker color - you should let them do your hair. It will be fun!

Glad dh is okay and you got some good knitting time in.

must be something in the air, I just returned back to my natural color after being a blonde for quite some time.

Glad the procedure went well. I'm sure he's relieved it's over. I have to make an appointment for one. Blech.
Ambrynn is teething, too, but nothing has poked through yet. She's been eating rice cereal, though, and loving it. It's fun comparing them since they are only 2 weeks different in age. Oh, and she weighs 18 lbs, the little porker!

Those Starmore pictures are incredible. Normally I feel no desire to try fair isle knitting, but those make me think about attempting it. The colors are just gorgeous.

Don't worry too much about hair color. The best thing about trying out new shades is that it's not permanent at all. As long as you don't change too drastically you should be fine.

Oh my! There has been so much going on in Vicki-ville! I haven't done much blog reading until today of late, and as usual, I love to get your scoop! Must be National Colonoscopy Month...I take my husband next week! And, I so want to see that movie, now that I hear an "official " review....Thank you for the blog link of the Starmore Knits. Good Grief! That is amazing!

I'm with you...Typepad is the best, for a lot of reasons. Go ahead, play with your color. The worst that happens is you don't like it and it grows out to your own.