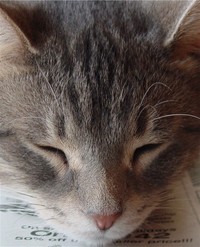 I forgot to mention that I am working on Spherey's limbs -- so far, there's only an arm, but they work up quickly.  He's propped, like a smiling orange, in a small dish on the entertainment center at the moment, overseeing the living room and, with that wonderful smile, it appears that he approves.

Mary in Boston was correct when she noted yesterday that Scamp was atop Time magazine. We laughed about cats and how they like to do that -- usually when we're actually trying to read.  That reminded me of this picture I took of Duncan and the Sunday paper a couple of weeks ago.  Isn't he adorable?  Well, yes; that's why I ran, chuckling, for the camera instead of tossing him off.  We've had him for about a year now and he's like everybody's favorite sidekick, except maybe Roxie's, and he's just so charming. He and Scamp scuffle playfully everyday in a way that reminds me of Mufasa and Simba in The Lion King -- Scamp's like, "Yeah, I'll let you think you're as great as you think you are, and that maybe you even have a chance, but in the end, buddy, I'm still head cat around here and you won't forget it.  Just your daily reminder."  In a nice way.

Busy day yesterday.  Maddy has no cavities; let's hope the result is the same for Ali today and Katie next week.  Results of my test(s) are not back yet, but not much reason for concern.  It's the first time I stepped on an official scale in a very long time (haven't used the unofficial one much recently, either) and I can now say that it's just shy of 25 extra pounds traded for that extra grand that I've saved by not smoking thousands of cigarettes.  The doc, of course, said she'd rather see a little extra weight than continued smoking.  Interestingly, on the way to the doctor's office, I heard part of a call-in radio show (I had mom's vehicle and could not figure out how to switch from AM to FM) regarding the Scotts Miracle-Gro Co.'s policy regarding smokers -- basically, quit or you're fired.  More info here.  One of the TV network news shows aired a similar segment/different company recently.  That led to call-in discussion about other health risks due to lifestyle choices -- mainly obesity and alcohol consumption -- and the idea that people with higher risk would pay more for health insurance.  Scary territory... Who decides what and how much of it is a risk?  Who decides that someone is obese due to choice?  Will Big Macs be regulated?  If you're going to make this type of argument, couldn't you say that people who engage in risky hobbies (some of whom already pay more for life insurance) -- sky-diving, car racing, downhill skiing, maybe even rollerblading -- pay more for health insurance, too, being more likely to have a serious accident requiring a doctor visit than someone who, let's say, knits?  Scary, scary.  I'm just happy that I quit smoking on my terms, not my employer's or my insurance company's.

Anyway, Katie's home from college with all her stuff -- DH went to get her yesterday afternoon.  She leaves for London in three short weeks.

I am suffering from holiday-induced ADD.  Let's not talk about knitting today.

Great picture! (And you know how I feel about animals. ;-) )

I gotta agree with the doc. Pounds are probably a lot easier to get rid of then the smokes.

It is a bit scary that anyone can be allowed to control our lives...our private lives. My cat used to love to lay on the newspaper and our dogs still will try to knock it out of your hands. They want huggies!
Relax and enjoy your holiday and start the new year with a new outlook.

listen, I'll give up the smokes, but I will be damned if some insurance guy is going to make me give up my promiscuous sex life. No way.

Oh dear - more cute cat pictures. DH is NOT a cat person, but I would love to get another 4-footed friend for the holidays. I miss my old gal very much - how I managed to get gifts wrapped without her "help" this year, I have no idea.