Give me an "M"
You should have seen the one that got away... 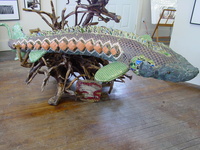 A day without Margene, I survived.  Many craptastic (bow to Norma) days with (or without, as the case may be) Bloglines, I survived; I even kept on feelin' the love.  The learning curve days spent with NewsGator, not too bad. 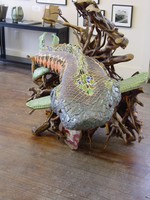 A whole day without Typepad?  For them, too, I've kept on feeling the love.  They've grown awfully fast, as have all blog-hosting services, I imagine, and have had some growing pains -- lots.of.growing.pains.  It seems that they were pretty up-front about it today, when ProBlogger called and asked about it directly, and then later on their own sites.  A whole day, though.  It does blow.

I've read more than once, though, that a blogger should have their own domain, own their content with no fuzzy lines.  I know, too, that other folks (JenLa more than one, twice, thrice, girls?) with other blog services and/or their own domain have issues with losing things from time to time.  That's what I call techno-crap and you've just got to expect it.  Computers fry, hard drives fail, domains blow.  Is it time?  May I soon be Jaywalking in more than one sense of the word!

Techno-crap is right on the money! Doesn't it just drive you around the bend when it happens!

I was a tad irate with typepad myself. Cuz honestly I dont think the service is that much better than the free variety.
I do have my own domain and by going to it, your redirected to my typepad blog. The only reason I dont have moveable type installed on my alreayd paid for domain is that something I need isnt up to date....therefor, moveable type wont work.
As soon as I am able, I'll be getting rid of typepad.

There you are! I thought I'd lost my mind when I couldn't find the Weasley update! Glitches will occur from time to time I guess, but it hard to accept that it doesn't always work one hundred percent of the time. Like cable tv...LOL.

Welcome home honey! I missed you!

Missed you! I'm pretty happy with knitblog hosting and movable type. And they back everything up every night!

I just can't think about changing. Tpyepad is just so easy (when it works);-)
It was strange to not be in Blogland but it was a good time of year. Things have been rather slow. I did miss my buddies enourmously.

there are ups and downs to having your own domain and content and all that fun stuff. i bought my own domain when i started blogging, mostly because i wanted the flexibility of having any number of extra pages without having to pay for it. (have i used any of those? um, no, but that's not important.) i used blogger for awhile, being morally opposed to paying for my blogging software, but last summer I switched to Wordpress and I love it. It has a somewhat steep learning curve, but it's incredibly flexible and once I learned all the little tricks, I haven't really had a problem with it. The support is terrific (and all user-based, there's no real helpdesk) and if I ever get good enough at this web stuff, I can even do a template makeover (one day ... after law school, perhaps). i think it just depends on the person. i have service issues once in a while with my domain host (like my site going down for about six hours last week), but they're relatively rare and usually not long-term.