Music to my ears

The back of the Wee Weasley has joined the sleeves in the finished pile.  The next row on the front will see the start of the letter "M."  I have the last of a two-session color knitting class at my LYS on Wednesday afternoon and I'm going to work on it then.  I love the class, by the way, there are only two other "students" besides me, so it hardly even seems like a class and is practically one-on-one.  This isn't a something that I really needed, but it's helping to reinforce some things and I'm enjoying it.  Focus will soon be shifting to sock and shrug.  /knitting 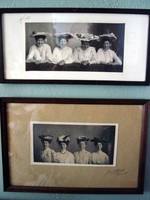 There was a comment or two about the artwork when I posted the pics of my knitting space last week.  There are many old photographs and, among them, these ladies that DH rescued from the curb several years ago and brought home to live with us.  He's brought home other ladies and gentlemen, but none have stole my heart like these girls.  The same four women are in both pictures -- they're small, maybe 3" x 6" or 4" x 6".  The one on top is dated '04, the other is undated.  I have no idea who they are or why they were photographed like this -- I have another photo of a larger group of women and these ladies are among them, too.

I love the playfulness in the top photo.  Their expressions and posture, the tilt of the head -- look at the girl who is second-from-right -- it all says, "Fun, fun, fun!"  It isn't just their attire that is different -- it's their whole demeanor.  I figure that the second picture was taken about a year later.  It's a bit more formal; they're much more subdued and "lady-like," but I still see twinkling eyes. 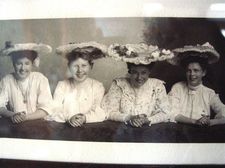 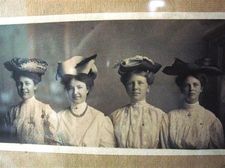 I'm a little pressed today, but I had a great weekend that included lots of music -- even dancing -- and "Walk The Line" (go see it -- RUN!).

Those hats are amazing! =D

What a lovely tribute to the unknown ladies. I'm sure they would be very pleased. Camille (the friend in my post today) has two boys. She had pictures taken of them as little boys and the exact pose taken as late teenagers. It is a favorite for us all.

I love your ladies ----- I wonder how they ended up on the curb?!! those relatives should be ashamed of themselves! tsk tsk.

I LOVE those ladies hats. Amazing!

Oh I loooove those pics! I'd probably have names and imaginary histories made up in my head for all those gals.

i love those pics! makes you wonder how they knew each other, the types of bonds they shared... reminds me of the women from the ya-ya sisterhood! love your blog :-)