One of these things is not like the other...
Ain't no sunshine 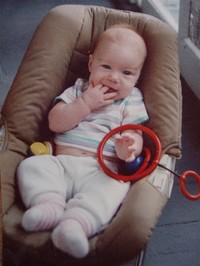 Ali.  This picture is one of many on my 'fridge and has long been a favorite.  There are so many favorites.  I was sitting on the porch swing in the small, screened porch of the house we were renting at the time -- we bought and moved into our current house in September that year and this is probably one of the last pics taken there, so Ali is about 5-6 months old and sitting in her car seat.  The house was on a very busy corner, but the porch was rather hidden by bushes.  Guess what my main activity was on that there porch?

I had a different doctor for each of my kids' births.  With Katie, we were living in a one-hospital town. With Ali, we'd moved to a two-hospital town and I didn't realize that doctors had affiliations with specific hospitals.  I chose the doc that I wanted, and the hospital I wanted (before insurance started dictating such things with iron fists), and they weren't affiliated.  That means that when I was in labor, they waited until the last possible moment to call her because once there to attend me, she wouldn't be able to leave until I delivered.

I hadn't been completely thrilled with how Katie's birth went (though the final result was stellar) and thought that by choosing a woman doctor for Ali's, it would be better -- just because she'd "know."  I also chose to use a birthing chair.  This is where a doula, or some sort of advocate, would have been handy -- for no other reason than to tell me what to really expect.  Silly me, thinking that the experience was all about me.  I went sailing so high up in the air in that birthing chair, as it was adjusted for the doctor's comfort, I felt like I was on a carnival ride, except there wasn't a Sno-Cone vendor in the room.  When they were all exclaiming about it being a girl -- and having red hair -- I couldn't even see, I was up so high, which also meant she wasn't in my arms...

I had to call my sister last night and tell her that I blogged her stuff -- and hope she didn't mind.  It kind of just happened.  She knows that I have a blog, but I don't know what really comes to her mind, and she's just not so enamored with the electronics.  She doesn't have email and has limited internet access and no web presence (no cable TV, either).  Anyway, she was thrilled to hear about the response, and I'll be in touch shortly with all who expressed interest in her beautiful work.

Yesterday was a day for the culinary history book!  I made Spinach Calzones, and even blanched my own spinach (so easy in the microwave).  Spinach is not the favorite green vegetable of most who live at my house, but it is one of mine and I thought I could slide this dish through with little complaint.  There was a little "iffiness" in the air, even from our very polite dinner guest (a new friend of Maddy's), but once they stuck a fork in it, I didn't hear any more.  In fact, everyone -- everyone -- at the table had seconds!  The most persnickety one (pictured above) was not there, and THAT would be the ultimate test; most agreed that she wouldn't even try it.  ; )

You want knitting, too, don't you?  It has been decided that there will be two pairs of Petrified Jaywalkers -- one tall, one short.  I started the heel flap on that second sock last night after 20 (I think) repeats and have turned the heel.  I will knit the short sock's mate next, then the second longer sock, having leftovers from the short pair to finish the longer sock if I run short of yarn, which is a very real possibility.  That's the long and short of it.

I'm feeling better.  Thank you.  Still stuffy and sniffly, but my throat's not so scratchy.  I did some adding and rearranging with the blog photo albums yesterday and only have a few visible on the main page.  All of the albums are available, at all times, on the Blog Links page.  I've got more blogcleaning to do, but it's a start (it's kind of like housecleaning -- is it ever really finished?).

aww, what a cute baby!!! And she's grown into such a beautiful woman.

The spinach calzones sound great. I may need to try to make them.

what a cute A you have!

Cutie pie baby Ali - but I LOVE the graduation picture! Beautiful. Glad you're feeling better and have come up with a plan for your jaywalkers. L, C

Hope the cold continues to get better!
and you totally scored from your sister at Christmas! She does lovely work but I think I won't trust the post from the US to here....