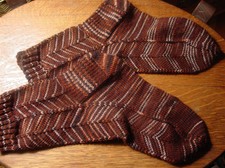 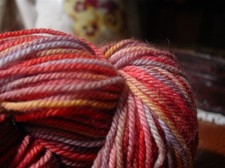 That would be the Petrified Jaywalkin' way in Socks That Rock!  I happened to be with Cara at Rhinebeck, way back at the very beginning when it was just a small stampede to The Fold she'd started because of this really great yarn.  Then she found Grumperina's sock pattern at Magknits -- a pattern for which Cara and this yarn was, apparently, cosmically, made.  And then, fueled by her unbridled excitement, she began the untethered Jaywalker Knit A Long, which has quickly exploded into a living, knitting legend.  Poor Cara.  I suggested to her yesterday that she might possibly have knit enough Jaywalkers for herself that she could tie them all together, thereby making a little Jaywalker sock rope which she could toss out the window and fittingly use to escape the Jaywalker prison she has created for herself.  I offer safe harbor, with open arms, to the Jaywalking fugitive.  You done good, girl, and we love you. But what's that other stuff?  I had the most wonderful belated birthday package the other day from The Bookish Girl.  The yarn up top is a 250-yard hank of Woolarina Handpainted Merino Sport Weight -- check out her complete catalog here.  The package also included some of Woolarina's stitch markers, some wacky fabric patches, a grow-your-own sunflower kit (perfect!), and an old wooden bobbin from the Classic Elite factory.  Oh, how I love stuff like that -- stuff like all of that!!  Thank you, Wendy!

There are my new swatches for Williamsro -- my event in the Harlot Olympics (also a living legend -- both the Harlot and her Olympics!) Can you believe there are 2100 participants and counting?  If even half of the competitors medal in their events, that's going to be a lot of FOs come the end of February!  I'm itching to start.  Now that the Jaywalkers are finished, the only active, on-the-needles project is Shirley Shrugs.  I have vowed to cast on nothing new until after the Olympics, so Shirley's getting all my attention for the next two weeks.  Maybe I'll have an FO to start the Olympics!  That might be the equivalent of scoring a touchdown to take the lead just before half-time.  ; )

YOur socks are great. Isn't it amazing how something can just take on a life of it's own in the knitting blog world? Did I miss your Shirley Shrugs? I must try to find it!
Have a spectacular day, Vicki!

THE SOCKS ROCK!!! And yes, you were there at the very, very beginning. I can't tell you how this yarn and this pattern has changed my life. I think the happiest person to see this all end, though, is G. He's tired of hearing about it for sure!

Thanks for being a safe harbor. I know I can count on you in a heartbeat. And our Wendy! Isn't she the CUTEST!!!

Your Jaywalkers look faboo! I definitely see some of those in my future! My ability to amass sock yarn far surpasses my ability to knit them up, but I'm working on that! Hee!

That colorway is really gorgeous. I don't see many variegated yarns with a brown base, and I'm quite taken by those. Lovely photos as always.

Lovely JWs! The KAL will be as legendary as Rogue and the Knitting Olympics. Cara done good;-)

Your socks came out so cute! Would you like them to appear in the gallery?

Your Jaywalkers look fabulous! What great birthday presents from Wendy -- how fun!!

your Jaywalkers are leading the parade - love, love the colorway. I wonder if I bought any of the same?

fingers crossed for your computer ills -- I wonder if it is just a case of dust bunnies?