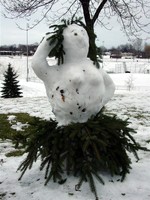 This fair maid was around the corner and at the end of the street the other day -- couldn't miss her!!  What a hoot, huh?  Bringin' in the new year in style in our neighborhood!  The temps have been so mild lately, and now it's raining, so much of the snow you see there is now history. 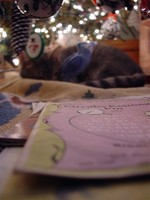 I did have some knitterly gifts under the tree this at Christmas and, this morning, while I was shooting to share, look who else was under the tree.  It's been one of his favorite hang-outs and, thankfully, he's left the ornaments alone.  The tree will stay up 'til after the Feast of the Epiphany this year because that's what Grandma used to do, that's what Mom's doing, and... I don't feel like doing it 'til next weekend, along with just liking the way "Feast of the Epiphany" rolls off the tongue.  I'm not a stickler for tradition, though, as there have been plenty of years when the tree was history on the 26th!

So, my sis gave me a great gift this year...  a half-dozen of her hand-decorated cereal bowls and a large, round platter, and as I unwrapped and unpacked the bowls, there was a whimsical, vintage sewing notion nestled in each -- a card of buttons, a thimble, a packet of needles -- something new in each one.  She used two balls of Trekking XXL sock yarn, in addition to bubble wrap and tissue, to protect the stoneware with more vintage knitting items lining the bottom of the box:  two issues of Needlecraft magazine, a booklet of baby knitting patterns, a "circular knitting pin" (it has a metal cable) as well as a set of five, vintage, steel, double-pointed "pins."  It was a very fun gift to open and receive. Each of the bowls she made for me is unique in decoration (EVERY piece she makes is one-of-a-kind), so each one is like a separate gift to be admired, acknowledged, appreciated.  They are artfully stacked and displayed on my kitchen counter and may be there for a while.

Remember when I sewed the zipper into a sweater for a friend a while back -- kind of a round-about, something's up, "favor" for DH?  (The sewing was a snap, I tell you.  The hard part must be the basting and that had already been done!)  In return for the services of my sewing machine, the friend gave DH a stack of old knitting/craft magazines, for which he then found a pretty box in which to put them, and wrapped them up for me!  When I opened the box, the "Modern Needle-craft" that you see at left was on top -- that was the issue that was current when I was born.  There are a few older issues of "Vogue Knitting Book," the earliest of which is Spring/Summer 1954, pictured at right.  These are a blast.

I am positively honored and, really, just verklempt to be acknowledged in JenLa's Second Annual Knit Blog Awards show.  The blogging of the quit has been immeasurable in my success.  The winning of a frickin' award -- an admitted "we are making this shit up" award -- for the quit pretty much seals it, you know?  It's funny, to me, because I briefly mentioned smoking in my very well-typed (for a woman who had two grande margaritas under her belt, along with a starter margarita before leaving home and a nightcap margarita afterwards -- and while writing) New Year's post...  I hadn't given much thought to the smoking and drinking 'til we'd pretty much arrived at the door on New Year's Eve.  One step inside reminded me that, oh yeah, there's that recently passed no-smoking ordinance, and that was kind of a relief.  I'd decided that we'd sit by the windows, though, not realizing that I'd picked a front-and-center seat to watch as everyone else went outside, in a steady stream, to smoke!!  It's been hard, the holidays are stressful, I'm fat, I miss smoking a lot, I want to smoke... but I can't -- all the reasons I try to come up with for why I should are just plain stupid.  So I struggle to some degree almost everyday and I make the choice every single day -- most days it's fairly easy, but some days it's hard and it feels like I'm "making the choice" over and over and over.  It's pretty weird to think that anyone has found strength here, too, while I still feel such weakness sometimes.  I guess that's what support is all about.  Honestly, the Thank You Award goes to each and every one of you!!

Yeah, I'm pretty good at being verklempt, too, huh?

I feel as though I've been knitting in slow motion all week.  I have begun the two on my first Jaywalker, though, and I'm very excited -- I will likely finish it today while I watch the Badgers (the game's already underway -- I'm so SLOW today).  I did not knit at all during the Packer game yesterday, giving full attention to (as I'm so SICK of hearing, but have to repeat) possibly Brett Favre's last game.  The firing of Mike Sherman as coach this morning was surprising, to me, but I have no clue how it's going to go for Brett or how the coaching staff decisions will affect his decision.  I, for one, would like him to play one last season.  I'd actually like him to play for "four more years," as the crowd at Lambeau chanted a few times yesterday, but one would be good, and I think it would be good to know, at the outset, that it would be his last, no matter what.  That would end the speculation with every frickin' pass, every tick of the game clock.  One last season, give it your all, come what may.  The end.

The snowmaid is a hoot! I love the vintage knitting books. I didn't get one knitterly present ( pout)

That snow madam is wonderful! May 2006 be easier for you, a great year of knitting and a fabulous year for us all in Blogland.
Hugs to you sweetpea!!

Loooove that snow woman! I wish we had some snow, but it's water, water everywhere in Northern California this week!

I'll be waiting to see if you find a pattern to make from one of those fabulous books! I love finds like that, what a great gift!

YOU ROCK! I'm so, so proud of you and you deserve that award! THANK YOU!

Vicki, you posted so beautifully about the quite just now. The honesty of your emotion and struggle is what makes it real, I believe. Happy New Year and keep on keepin' on.

Congratulations on the award,and on not stepping out for a smoke ! What's wrong with fat ? Huh? Huh? Seriously,although I'd never advocate being as fat as I am,I do think a little extra on the hips is far more attractive than lung cancer.
You've done brilliantly.
Your sister's gift was so full of thought and love. How delightful.

what a great present from your sister! I happen to have that very same baby knitting mag - the one with the pink bonnet on the front. It came to me through my Grandmother's knitting stash. I would like to issue a complaint that there were no pictures of these fantastic bowls - what's up with that??

congrats on the quit! I feel the exact same way that you do - the holidays were hard and I missed it a lot. We shall just keep trudging on!

I got some old issues of Vogue Knitting recently too! They are a blast to look through. Mine are in some serious need of love and attention, and when my blog is healthy again, I plan to go through them and post highlights.

You are doing wonderful things for yourself, friends, and family by sticking with the quitting, Vicki! Congrats on the blog award, and keep up the strength. Yes, the decision is made every day - but YOU CAN DO IT, because YOU ARE DOING IT!