C is for...
Hormones on the air

TypePad's home page has a feature section to showcase their user's blogs.  Recently, they've featured Ben Roethlisberger's Official Blog where I left comment #250-something, congratulating him and his team on their Super Bowl win.  Dork.  Not only that, but I was all misty watching Bart Starr deliver the Lombardi Trophy at the award ceremony.  I think my favorite commercial was "Addicted to LOST," (that's a video link and may take a while to load) a bit of fun with a great, old Robert Palmer song.  Both the National Anthem and half-time show were uninspiring and disappointing; I was most disappointed in the anthem performance.

I completed the first short row shoulder over the weekend and I think it turned out great!  It's very difficult to photograph and I think it's hard to even see it (which is a good thing) -- I can see some blurpy stitches on the row where all the wraps were worked, but it's not bad.  It curves!  I'm not quite sure how the second shoulder will be worked technically, but I'll be thinking about it as I work my way over there and it'll get figured out.

Pics:  modeled on Maddy's shoulder (above); right side (left); wrong side (right).  See the bend?  It's like magic.  I do see an extra little twist in the cable at the bottom of that last diamond (the wrap row), but I'm not worrying about it.

I was in my PJs, celebrating International Pajama Day, until nearly 5:00 when I packed up Shirley Shrugs (& Her Short Row Shoulder) to go for pizza and football at Mom's.  The nice thing now is that I can knit it in her presence.  Sometime after half-time, she said, "That a lot of knitting, isn't it?  You wouldn't think so, for a shrug."  Heh, no ordinary shrug, mum. 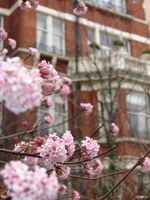 Katie called Sunday afternoon.  She had a busy weekend, visiting Hyde Park (where there are flowers!), Kensington Palace, St. Paul's Cathedral for evensong, Leighton House.  Actually, what she said was, "I went to Lord Leighton's house."  I heard it in the same way that she might have said, "I'm going to Jay's house."  I said, "Did he invite you in for tea?"  ; )  We had a good laugh.  (No, she didn't have tea with Lord Leighton, nor with the Queen in her gallery at Kensington.)  ; )  A fellow student from North Africa asked her if she was going to be watching the soccer game...  She thought she'd watch a little.

Next weekend, Katie will be going to Wales -- horseback riding, even.  And in a few weeks, she'll spend a weekend in Peterborough with host parents my sister had during her time studying in England.

I was disappointed in the national anthem as well - I expected it to be more inspirational with that choir they had as backup. Frankly, I'd have rather heard the choir sing. As for commercials - I loved the Bud Light one with the revolving wall to hide the fridge. "Dudes, the magic fridge is back!"

You know...I totaly missed the LOST ad during the Super Bowl. We were getting the kids ready for bed, the phone kept ringing, and in between that I was knitting.
I did click on the abc site last night for something else and saw the short version, so THANK YOU for blogging the long version!

And like Carole, I also loved the Bud Light one. BUT, I thought the Disney World one with the players practicing "I'm going to Disney World" the best. My husband thinks it was weak, but I loved it!

Those sweater shots are interesting. Looking forward to seeing how it develops.
And nice to hear that Katie's enjoying her stay in the U.K.

Yes....Robert Plante was a blast from the past as were the half time show with the Stones! YeaHHHHH Steelers!!!!!

Oh, that's so cute that you left a comment. Now that you're a blogger, you know how good it feels. Hee.

Katie is having a wonderful time, it sounds like, and certainly taking proper advantage of her time there.

I agree with you about the naional Anthem. I thought it was the worst I have ever heard.

Ugh. Sorry about the typo. That is what happens when one tries to sneak in reading a few blogs at work. :)

OMG! Thanks for the link to the Lost video. I sent it on to Eva.

I only watched a little of the Stones yesterday, hardly any football at all. Instead, I partied with my gals. It turns out I am not a football dork.

I was cracking up at the "Streaker" commercial with the naked sheep, and the rancher who says "I didn't need to see THAT!"

I missed the national anthem, Sounds like that wasn't an entirely bad thing for me to do!

I was only half watching the game, as I embarked on a sewing project of crazed proportions, but it was nice to look up from the machine at the breaks and see all the commercials!