Red-faced skimmer
Let's do it again

Is it crunch time yet?

I just checked Stephanie's count-down clock and it's four and a half days to go, give or take a bobsled run or two.  Earlier today, I was getting nervous, but tonight was very successful and, betcha by golly wow, this all just might come together. 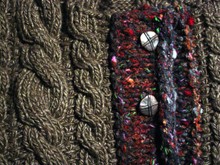 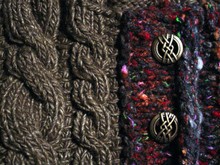 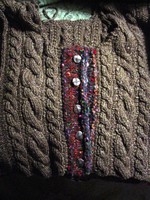 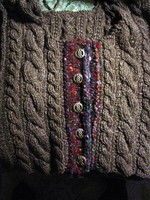 First of all, I was able to sneak out of work a little early and stop at the LYS on the way home instead of doing it tomorrow (on my way to an oil change -- poor planning, I know, but it has to be done).  I bought the buttons that you see pictured on the right; those on the left I already had and they've been earmarked for another project, but, you know, I'm open.  Both a clerk and a customer at the LYS liked the new ones over any others I'd considered (oh, some really cute square ones!) because the design kind of echoes the cables.  I really like them both.  I really, really like the ones I already had, but fear they may be just a tad too small.  You can click to make the pictures big, and then click again to leave me a comment and let me know if you have a preference.  ; )

Please ignore the curly button band, it has yet to be blocked.  Have I mentioned how beautifully both of these yarns block?  How absolutely thrilled I am to discover that the most delicious yarn I've ever worked with can become even better?  The yarn is definitely doing its personal best.

So, at least having some buttons makes me feel better, and I also picked up a couple more hanks of the Blossom.  I'd rather have too much than too little -- I've got a lot to do and only just over three yarn cakes with which to do it.  I bought the original stuff on ebay (my LYS didn't carry it at the time and the stuff I bought in NYC -- which I don't regret for a second, Cara, and have a use in mind -- was the wrong color) and it was already wound up, so I really didn't know how much was there.  Anyway, it's likely that I'll need only one, if any.  I also picked up a 13 US circular needle -- I'm going to need it for knitting the Blossom bands on both the collar and the bottom of the sweater.

What I really needed to do tonight was tear out two shoulder seams, rip and re-knit both shoulders on the back (making the neck wider and the shoulders narrower to match those on the fronts), rip and re-knit one shoulder on the front (I had decreased 3 rather than 5 at one armhole), and then re-seam the shoulders so the cables lined up.  At left, you see the ugly before, and at right, the much more beautiful after.  Thank you, exalted Zen Master, for sharing your wisdom and guidance.

I'm afraid there are some, such as Christine, who are struggling.  They're feeling the burn and it's all they can do not to wander aimlessly between venues.  (Our fearless leader is in a whole other, stratospheric class here -- I can't even imagine the burn she's feeling...)  And that's another thing I like about these Knitting Olympics:  I am compelled to employ and and exercise my stick-to-itiveness, to stay focused and on-task.  In this situation, I would have much rather let Williamsro stew than fix all that stuff -- at one point, my thoughts actually wandered toward "scissors" and "how could I cut off a couple of stitches at the edge"; I would much rather have started a sock (or anything).  It feels wonderful to have persevered and I'm energized to see this through.  I'm visualizing!!

Williamsro is looking utterly superb. I would, without doubt, vote for the new buttons. Not only is the size a better match, and the design lovely, but the colour is perfect, too. At least in the photographs! Congrats too on bending the neck/shoulders to your will; I know you wont' regret it! :D

I prefer the buttons on the left. :)

When I saw this post in bloglines my heart jumped! Is it done? Oh my it's beautiful!!! Honestly here - I think I like the old buttons better, there's a rustic-ness to them that I think is beautiful, BUT I think the new buttons fit better on the sweater. You need the larger size. That's not to say I don't like the new buttons too. I think it's pretty cool that the cables match up.

Whatever buttons the sweater is going to be gorgeous and WHAT a sense of accomplishment! I better get knitting on my mittens. I might not finish!

Definitely the new buttons- they're amazing with that pattern.

I do like the new buttons better. The bigger size seems to fit more. And I think it's really interesting to read about what we've all learned through this process.

Oh - I love your sweater! It is wonderful. What a great design, with the button band in a beautiful contrast color.

I like your new buttons better also... they look great. Size does matter (lol).

It may not be crunch time yet, but I have switched to Scotch.

Ooh! It's looking so good, Vicki! it is a bit of an endurance test at this point, isn't it?
(Definitely the new buttons)

Williamsro is looking wonderful! I love the contrasting facings (or edgings)! You are my inspiration..........I CAN do it.......
Also, I like the new buttons better, too!

Both buttons are gorgeous, but I think the new ones are a good choice for this sweater. I definitely think that they are more proportionate to the sweater design itself.

I love how organic looking the first ones are!

I have to admit that I'm truly glad I didn't take on an olympic knitting project. I am really enjoying the whole spectator thing though!

Great work, Vicki! I like the new buttons best too. Your freshly reseamed shoulders look perfect! Way to go!

It is looking so fabulous. Can't wait for you to F the O!

I like the buttons on the right - they match perfectly!!

Your shoulders look fabulous - you should be proud for perservering!!

first off, i love your blog...not only interesting but pretty too (i'm new to this whole thing and mine is a bit, well, plain is being nice) anyway, love the new buttons...mind telling us who makes them? i have a cabled-all over sweater that is still buttonless since i can't find a thing i like. thanks, and again great blog!

The cabley buttons are too good not to use! It really looks good and nice redo on the shoulders. I, too see GOLD in your future!

girlfriend ---- I love my birthday card(s) that arrived yesterday. Where did you find the antique pig postcard? Cara and I were competitively comparing our cards - me: she said I get cuter everyday her: well, she said that she loves me best!

ps. I vote for the newer buttons - they are a better size and I like the way they echo the cable motif

Just chiming in to say I love the button on the right best!

What a gorgeous sweater! Congratulations!

I like the new buttons on the right!!! They are perfectly perfect!

New - the color and the cables look perfect with the sweater. The ones on the left are beautiful, but they get lost in this combination. Great sweater. You're inspiring me to take the extra time to make sure things are just right.

I love the sweater!

...and definitely the new buttons...