Is it crunch time yet?
Hello? London calling!

Let's do it again

Thank you for all the input on the buttons!  The new ones it is (or will be)!

Working those shoulders was so much fun that I decided to do it again, especially after discovering that the sleeves were too small (or the opening too big).  I fiddled around with the fronts and back so much and concentrated on so many other things that I didn't even think about the sleeves!  It was a good few inches -- too much to fudge.  ACK!  I actually called two LYSs and considered driving an hour each way, if they had the color/lot, to see if I could track down more Cash Iroha to rip back the sleeves.  I decided, though, that the sleeves are okay, it was the body and the opening for the sleeves that needed the fix. Thankfully, there weren't any other implications and, in the end, it probably turned out for the better.

So, in a repeat of yesterday's performance, I tore out the shoulder seams, ripped back even further and re-knit both shoulders on the back (realizing that I'd skipped a phrase about casting off a few more stitches on the next rows at the neck edge and that's why I had to do this yesterday), ripped back the fronts to match the new measurement, and re-seamed the shoulders.  Some of this was performed in the waiting area of my Saturn dealership where an elderly gentleman sitting nearby was busy with his crochet -- looked like a baby blanket.  I didn't inquire; I was too busy, too focused on my event for chitchat.  When the young man came to tell me that my car was ready, I had scissors and yarn and Chibis all over (weaving in some ends at that point) and he smiled and told me to take my time.  I wonder if his mom or girlfriend knit.

I sewed in the sleeves and, apparently, most of my events those where they take the combined score or something because I had to do the first sleeve seam over, too!  (Note to self:  In the future, my training for this kind of thing should include some practice seaming -- particularly and especially sleeves.  They always seem too tight and have no give on the first run.)  Tired of seaming, I used a bunch of stitch holders to hold the sides and sleeves together, and moved on to knit the neckband instead.  It is getting more exciting by the minute.  Before the bottom can be done, the sides will have to be seamed.  I guess that's the next step. 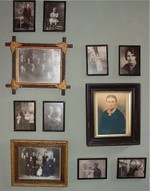 I've seen some front doors view around the blogs...  I can't stand the view from my front door!  It's of an old house across the street -- the front door of that house lines up exactly with mine, but it's down a little hill.  The lady who used to live next door to me, who was in her 80s and had lived in the house next door almost her entire life, told me once that Mrs. So-and-So, who apparently used to live across the street, would roll over in her grave if she could see her house.  It's not too hideous, but it's not good; there's a new owner and he worked very hard late last summer and into the fall.  I was quite excited to note that there was someone measuring the roof, so maybe there'll be roofing this summer!  Can new siding be far behind?

So, anyway, how about the view OF my front door?  Huh?  Am I clever, or what?  Oooh, how about this:  the view BEHIND my front door.  That's just as you head up the stairs, all family photos -- grandpa, grandma, greats and great-greats and even great-great-greats.  I've never found the right thing for that empty spot at the top right, and look at how crooked they all are!

Can I come live in your house? Although I love the house (home) my husband built 10 years ago, I do sometimes long for the one I left in SW Minneapolis which was 85 years old. I would sit just where that picture was taken and knit happily all day long! Good luck on the final stretch of the sweater.

I actually thought it WAS a view OF your front door. I took pictures of both. I love your door! And the view inside is fabulous.
Even with your redo it looks like GOLD is going to be yours.

what is the deal here? this front door is not the same front door from your snow day picture .... is one of these a back door? when I decide to drop by unannounced it will be very confusing for me.

Don't worry Ann, we'll just knock on every door until she let's us in! Although I have to say I'd be nervous in your house. So many beautiful things. I'm like a bull in a china shop. I LOVE the photographs. I have some old photographs from my great-aunts and I just love them. Thanks for sharing.

I was feeling your anxiety, as you wrote about your reseaming and un-knitting while waiting n the car dealership.....you can do! I'm still cheering you on!
Love the door picture!

Those are great pictures. I want to come visit, though. Maybe I can hitch a ride with Cara and Ann.

What an incredible front door! I love that you have all those family photos right behind the door, and in old-fashioned frames. The pictures and the frames match. This way your family can bid you adieu when you leave!

Hiya, Vicki! Love your front door. It's beautiful. And I love the way you've grouped all of your antique photos.

Kudos on finishing Williamsro. Such inspiration! Alas, I am one of the Olypians who has fallen down, but I am cheering you on!

Er, that should read Olympians...duh.

Your front door is beautiful! Love the pictures, too. I look forward to sseing your finished sweater. :-)