There's a path behind my house that is often used by kids from a nearby elementary school when they are on their way to a nearby nature center or the creek for a field trip.  I am always delighted to hear their chatter and giggles and watch them (they usually don't notice me) as they make their way.

Today, it's a field trip, at the suggestion of Becky (go see hers!), to my back yard from the comfort of your own computer desk! 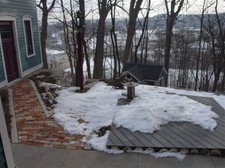 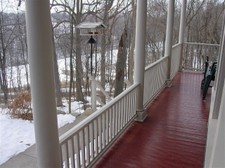 On the left is the view with my back to the back door -- and it's actually on the east side of the house.  Yes, we're livin' on the edge!  On the very bottom left you see a corner of the house -- there's a window on that wall into the living room.  Down two steps to the path which leads to the garage that DH and I built a few years ago and there's the "deck" we built even fewer years ago -- I'm going to a pergola over that thing this summer if it kills me!  See the plates along the edge of the deck?  You also see the roof of a playhouse that DH built for the girls when they were little -- it used to sit where the corner of the garage is now (when we had a yard and no garage) before it was displaced.  Beyond that is "over the river and through the woods" to the great beyond.  My location is one of the very best things about where I live and in the summer, when there are leaves on those trees, you can hardly see any of that -- it is very private.

To the right, you see down my back porch.  It used to be a big, L-shaped enclosed porch, but we did some remodeling and reclaimed some of it for use in the house (kitchen table) and opened up the rest.  I stripped at least 10 coats of paint off of each of those pillars with a putty knife and heat gun; they were reclaimed from a house that was being demolished.  I had a really good right pec that summer!  The birdfeeder used to be at the far corner of the deck, but it was also displaced.  You also see the top of a set of handrails for the stairway that leads to my literal back yard, a.k.a. "the lower yard."  There's a perennial garden down there. 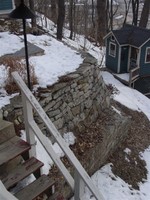 Here's a view from the end of the porch back toward the playhouse/deck/garage.  We have done a lot of work on that yard in the 19 years we've lived here -- including a rebuild of that retaining wall practically from scratch.  There used to be an iron railing affixed to a concrete cap at the top of that wall -- I can barely remember it -- and the first spring we were here, DH, acting like a 12-year-old (it happens), went out and started pulling/pushing on it in a "I wonder what would happen..." kind of way.  Well, guess what happened?  The railing broke apart and the whole thing went tumbling down the ravine!  He could do nothing but watch those big rocks tumble and roll at the bottom of the hill.  He had to bring every single one of them back up again, too.

I saw Michael only briefly yesterday, but he was off the ventilator at the time and the nurse was "jazzed" at how well he was doing.  I don't know how long he was off, but they're working up to an hour on, an hour off at this point -- and they'd like him to be resting comfortably during that hour off.  That's a goal.  He's not really there yet.  I think they'd also like to do surgery to fix that C7 as soon as they can, too.  I made him a card, using that picture of us that I posted the other day, and read it to him before tacking it up on the small bulletin board in his room; it said, "I can be the boss of you!  Get better -- fast!"  He tries to open his eyes and his wife said that they maintained eye contact for a short while yesterday -- he's so drugged up, though, it's really hard to know whether things register.  I hope so.  I think he has a sense of all the people who get "jazzed" about him.

There is an enclosed mall in our area, one of the first enclosed malls in the country -- it recently closed and will likely be razed, likely replaced by condos or something.  When we first moved to the area, that mall was thriving.  There were restaurants, specialty shops, clothing stores, a grocery store at one end (Kroger's!), a drug store, barber and beauty shops, and our dentist (ick).  Mom always had Mike's hair cut in an "English school boy" style and, with red hair and freckles on that round face, he was adorable.  When he was about 8, Mom decided that he was old enough to go to the barber by himself while she did some other shopping, assuming the barber would take his cue from Michael's current style.  What she didn't count on was Michael ordering up something completely different!  She didn't even recognize him with his new "buzz" when they passed each other in the mall.

Your yard is delightful! You have added touches that make it yours only. And I love that!
Michael is making progress. That is good. Progress is sometimes hard to identify because you want the end result.
xo

Lovely post......I felt like I was right there, walking around your yard!
Yeah for Michael, breathe boy, breathe!

Thank you for the virtual tour of your back yard. I'm sure it is quite lovely in the spring and summer, but I like it snow covered as well. My prayers are still with Michael. Be sure to tell him that he has a lot of unknown supporters that are pulling for him.

I LOVE LOVE LOVE your view. It's just gorgeous. I love porches, and hardwood floors...oh, will you adopt me? LOL. Glad to hear about your brother's progress. I am praying for a speedy recovery!

The view is outstanding and the deck is my dream ;-) I'd love a rocking chair out there to just rock and knit and enjoy the cool air ;-)

So now I see that the outside of your house is as beautiful as the inside. Just lovely, Vicki. And thanks for the Michael update. I do love your memories of him as a boy, too.

I just dropped in to read your blog after a long gap. I'm so sorry to hear your news. Will be thinking of you and your family at this difficult time and sending prayers and thoughts your way.

wonderful views - and that deck just begs to have a cluster of women knitting in rockers.. thanks so much for sharing -
and am adding some prayers for Michael.

I am glad things seem to be improving for your brother!

Can I come visit and knit with you on your deck?!! Just lovely!! I'll bring a bottle of wine or a nice pot of spiced tea - your choice!

Is that playhouse still usable? I'll have to post photos of the one my husband built for our daughter (now 9) who still lives there in the summer! Love and hugs to Michael.

Your backyard is as welcoming as your house!

You know, I was with a wee one this weekend - 11 months. As I held her this morning and she napped I commented on how much you can communicate with touch. I'm sure your brother senses all of the feelings around him!

You have a beautiful and special place. The views are so breath taking. It's amazing how far you can see without the leaves, but I can only image how peaceful and beautiful it is in the spring and summer. Gorgeous!

I got here by way of surfing the ABC ring, and really enjoyed the idea of the virtual field trip; will do my own soon. But what I was really taken with is your writing about your brother, interspersing your updates on his condition with memories from childhood. This is very powerful stuff! I am not much of a "pray-er" but will certainly be holding all of you in my thoughts and prayers; blogging is about life and this is what is happening in yours right now. Be good to yourself.

Thank you for your pictures, your house, garden and view are amazing. Good to hear Michaels progress too.

Wow. Now that is a view! I just love porches/decks. Those plates are such a nice and different touch. What a great house you have!

i missed all the news about your brother as i have been away, but just wanted to add that my thoughts and prayers are with him for a speedy and full recovery.

I love the plates at the edge of the deck. That's such a crative and unexpected touch.

I'm happy to hear that your brother is progressing even if it is slow.

Your yard and porch are absolutely beautiful. And so much work and love has gone into it. I can tell.

I have gone back and read about your brother. My thoughts and prayers are with all of you. I love the stories of him. I had to laugh about today's and the haircut. I have a 12yo redheaded son with freckles...he did the same thing! They are such imps those redheads. Keep up your spirits and keep sharing. It helps. and I know your friends new ( me for one) and old in blogland will be happy to listen.