This is the Trekking sock I'm working on -- color 128, mostly brown, black, and white, but with that little stripe of very pale orange/salmon.  I got a little further than this last night, but still only one bright stripe! 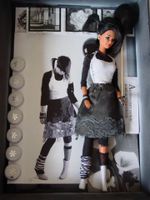 Maddy has a birthday party to go to this weekend.  She said that the girl pictured on the invite is not the birthday girl, but looks just like her.  She found a doll, some scraps of this and that, and transformed it into a damn good likeness, if I may say, complete with presentation box.  I'm completely blown away by the cleverness and creativity of my girls sometimes -- all three!  It's one thing to have a bright idea, another to try and do it, but it's a whole different stratosphere to actually pull it off, and they do!  Wow. 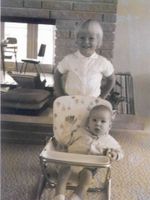 I was only about 3-1/2 when my brother was born and there's a set of twin girls in between.  Fortunately, for my mother, he was a very good, very happy baby -- he's got a huge smile on nearly every picture, lighting it up.  I think we were living in St. Louis at the time of this photo -- love the fireplace!  I think I may have doted on him, too, because there seem to be a fair number of pictures of the two of us.

They reintibated with a larger tube yesterday -- the swelling has gone down, plus they didn't know the extent of cervical damage and wanted to use a smaller tube at first.  They also removed the dressing from his head and why, oh, why didn't they just shave off all of his hair?  It looks ridiculous.  I suppose it serves as something of a distraction from that awful, horseshoe-shaped incision and everything else going on up there.  Oy.  He's also got the fattest lip I've ever seen -- I guess it was mostly covered by bandages before.  One of his bandmates calls him "Lips" sometimes, because my brother does have rather full lips, but now there's new meaning.  ; )  This friend went with my SIL yesterday to see the car and take pictures; they said that there isn't room for a person in there.  I can only surmise that Michael didn't see it coming, didn't have time to brace himself for impact or get tense; he must have been so relaxed that his body just went with it.  Oy oy oy.

The brace arrived yesterday and, after some fine tuning, it was fitted last night.  In another odd turn, the man who made the brace was a classmate of Michael's; Mom had put up a 20-year-old photo of Mike's band and the guy recognized them.  When I spoke with the nurse this morning, she said that he's intermittently restless; that it's darn hot under that brace, so no wonder he's uncomfortable; they're backing off on the sedation; raising his head up more; he opens his eyes.  Another CT scan is on the schedule for today.  I will be going up later.

Our parents woke us up and brought us all downstairs in our pajamas to watch the moon landing on the TV in our family room.  Those were the days when television sets were brought from the AV Room to the classroom and we dropped everything and gathered 'round to watch rockets take off -- live; Walter Cronkite reporting and all that stuff.  Gives me goosebumps -- it was so exciting!  Mike used to play "John and Joe" with Annie, our little sister; John and Joe were many, many things, and most memorable among them was Astronaut.  I'll try to describe some of the most precious Super 8 footage my dad ever took:

John and Joe, astronauts, had their air packs on their backs (rectangular sofa pillows in big brown plaid) and their helmets on (large, shallow, plastic bowls with the bottoms cut out for their faces to shine through).  They're strapped into the cockpit of their rocket (a green leather recliner) and Michael pulls back the throttle (a small, black comb) -- you can't actually hear him, and yet you can... he's making the sounds of a rocket on take-off, and nudging Annie so she does her part, her feet twitching wildly, her curly pigtails bobbing -- she's ready to explode herself!  Michael hadn't finished speech therapy yet, so he still curled his tongue all up funny inside his mouth, and you can almost feel the spray of take-off, too.  After a few minutes, they landed, emerging from the rocket to slowly and carefully explore the surface of "the moon."

What a cool idea Maddy had to dress up a doll to look like the invite. I'm glad Michael is making progress, too.

Thanks for sharing your memories. They are very special. I hope that Michael continues to improve.

Obvious to me where your girls get their creative nature...prayers for Michael.

I'll second Deb - those girls, growing up in the home and family you and Rusty have created - they didn't have a prayer. ;-) Creativity and can-do is just cursing through their veins!

Thank you for the memories and updates on Michael. I'm always thinking of you! L, C

Awwww. These little stories about Michael are making us care about that red-headed scamp even more. Now I'm trying to remember stories about my own siblings. I think that part of my brain as atrophied, as I can't remember a darned thing.

Thinking of you and your family pretty much all day long. Strength, courage, and compassion flowing your way.

V, Thanks for sharing all these stories about Michael. I am checking as I can for updates, and still thinking good thoughts.
I did go look at the Post Crescent archives and saw a picture of the car. All I can say is, oh my. The assessment that it didn't seem possible a human being could fit in there, is exactly correct. I actually shuddered when I saw the image.
Hang in there *hugs*

wow. not sure i can say much else. you continue to be in my thoughts and prayers. hugs to you all.

Maddy's doll is great, what a cool present. You little brother stories are very touching, glad to hear he is making progress. Sending hugs and good thoughts your way.

Keeping you and your family in my thoughts and prayers.

How clever of Maddy to make such an inventive gift for her friend's birthday. Surely it will be the remembered one!
I love the mix of topics in your post. Life does continue, doesn't it? Take care. You and your family are in my thoughts.