Second verse, same as the first!
Stand down

Lighting up the sky with the knit-love 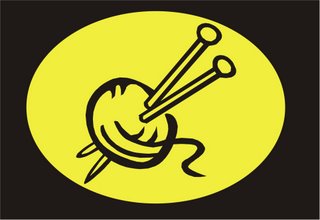 Do you think the knit-mobile could be a Roadster?  And it could shoot yarn and needles out the back into which the villain in pursuit would become entangled, kind of like an oil slick, but with yarn -- just the cheap stuff, you know...

The Commissioner (of course, it's Wendy!) has kindly provided a knit-signal beacon with which to call the posse.  Mine's a mostly virtual knit posse without which, truthfully, I mostly likely would have gone mad these past few weeks... or gone mad sooner... or madder later...  It has been a very welcome diversion and distraction to read blogs and it's been good for me to concentrate and focus on writing my blog.  I'm sometimes worn out and unable to put two thoughts together (as in responding to all the lovely comments, for instance).

I declare, here and now, that I will not be held accountable for anything I may or may not have done, in both real and virtual worlds, these past three weeks, and might well extend the declaration to cover the next week or so because the stress has been at times nearly unbearable and made for some terrifying moments.  The dial on the stress-o-meter isn't just going to go from red to green overnight.  I've found that I can laugh at something that's funny and cry over something heartbreakingly sad and freeze in terror at an unthinkable thought and go numb with would-have/could-have/should-haves and ifs -- all at the very same time.  It makes for a mess and I might even have exhibited inappropriate behavior at times (yes, dears, mild-mannered, even-tempered, mid-western moi) -- usually brief, then the emotions sort themselves out and I return to doing my best to keep it all together, to be strong.

Anyway, calling on the posse today, sending out an S.O.S.  You know what to do!  Kiss someone Irish and give 'em an extra peck with a thought for my bro, hm?  I hope with all my heart that after surgery today, the very worst will be behind him.

I'm wearing my lucky green socks for you today!

I do actually know some Irish people here in france, so today I am going to search them out and kiss them just for you, take care, am sending you good thoughts for today..xx

I'll being praying that your brothers surgery goes well today and that you can soon have a proper birthday party for him.

Thinking of you and your brother today and sending thoughts and prayers. Happy St. Patrick's Day and Happy Birthday to Michael!

Vicki, I'm sending all good thoughts and the luck o' the Irish to your brother today. And to you, too. Take care of yourself.

I'll be thinking about Michael and you all day........I know that waiting for a surgery to be over is horrible. Take your knitting, and keep in mind that many many people are praying for him. Chin up!

Thinking of M today. Let us know as soon as you know anything.

Good thoughts and lots of prayers for your family today!

Lots of prayers coming your way today. So happy to hear of Michael's progress and hope his surgery is successful.

Hugs and kisses to you and Michael on this very important day! Wishing you lots of things to celebrate today. You now know, better than many of us, how precious one day can be.

Vicki - I've only recently found your blog and been reading your posts since your brother's accident - please know you, Michael and the rest of your family have been in my thoughts and prayers. I've also been praying for the nurses, doctors and today's surgical team.

Now let me go find my Irish friend and give her a big kiss for you and Michael! Blessings to you both!!!

And a BIG HUMONGOUS MAN AM I PROUD OF YOU to Vicki on her ONE YEAR SMOKE FREE ANNIVERSARY!!!!! I know it's all about Michael today, as well it should be, but I am so freaking proud of you! YOU DID IT!

Birthday Salutations to your brother Vicki! and the very best wishes for his surgery today. and Cara beat me to the punch in congratulating you - yay for Vicki not smoking a whole entire year and especially through these past horrible weeks! stay strong!

Hope the surgery goes well. You are all in my thoughts today.

Sending healthy healing thoughts your brothers way (along with birthday wishes) and sendng you and your family comforting thoughts. You also get extra points for your 1 year anniversary!

Congratulations on reaching one year as a non smoker. It's a big deal, and today as I drink some Irish beer and think good thoughts for Michael and your family on his recovery, I shall also toast your committment and success in achieving this milestone.

happy birthday michael and congratulations to you on your one-year quit-iversary!

Happy Birthday to your brother!
Congratulations on your anniversairy!

BTW - GORGEOUS sweaters, girl! Knocked my socks (Jaywalkers) off ... the needles I am knitting them on, that is ;).

Prayers going up for your brother. Hope the surgery is successful and that he has a full and speedy recovery.

Kisses to you and Mike. I'll be answering your Knit-call a hundred times or more tonight. Meanwhile, I'm bakin' soda bread and picking up my 65 lbs of corned beef for the big bash. Kissing you virtually!

Signal received - can I kiss my own self, because I'm the only person I know that has a little bit of Irish other than the kids ;)
Hope all goes well today - surely it must be so on the day that is devoted to the luck o' the irish.

HAPPY BIRTHDAY MICHAEL!!! We are sending out batsized thoughts for all of you on this big big day. As I stitch the square for Michael's blanket I am putting hope and good wishes and love in each one.

Congrats on your anniversary too Vicki! Hang in there.

Hi! I am Max, Christine's sister in law. I just wanted you to know that I understand everything you are going through. I am thinking and praying for you and yoru family too.

I live with an Irishman, I'll give him an extra kiss for you ;o)

Thinking of you and your family today...

Prayers going up for your brother and family and you today!

Looks like the KnitSignal is getting answered in full force! I'll be thinking of Michael today as well, and saying a few Irish and non-Irish prayers for him and your whole family.
And congratulations on the not-smoking-for-a-whole-year!!

I'm just catching up on your blog - I had no idea.... my very best wishes and all the luck of the Irish to your brother today.

I've been reading about your adventures in smoke-free life from the beginning. I'm very happy to congratulate you on your first smoke-free anniversary!

And I check back here every time your blog lights up in Bloglines to check on Michael. Hang in there!

All good wishes to all your family and especially to Michael and you from Ireland. My the luck of the Irish be with you. with love Lindy

Faith and prayers ... and green down to the skin ... for Michael. Cudos to you on you accomplishmnent as well Vicki.

You are certainly in my thoughts and prayers; I can't imagine anyone holding things against you given the circumstances and it is heartwarming to hear that support from afar has helped so much. Happy St. Paddie's back at ya.

Happy Birthday, Michael! My thoughts are with you and your family.

Happy Birthday, Michael! Thoughts and prayers surround you and your family.

Prayers for you and Michael. I'm hoping by this time all is well with your brother. Happy Birthday, Michael!

Just found your blog and have been reading the entries about your brother Michael with tears in my eyes and hope in my heart. My brother, too, suffered a life-threatening brain injury several years ago and I well remember the agony and the love and hope. God bless you, Michael, and your family and know that people all over the world are thinking of and praying for you.

Only good Irish thoughts and prayers for Michael and all of you Vicki. I will rub my redhead's head for some good luck for Michael. I can be a late night "knit signal" answerer.

Been waving for Michael and your entire family all day. I've survived a few car wrecks and been the miracle. It's a struggle, but having family there makes all the difference in the world. Best of luck!!!

Saying a prayer for Michael and hoping that this birthday is the turning point where he gets exponentially better.