There will be days
Life's a banquet and most poor suckers are starving to death! 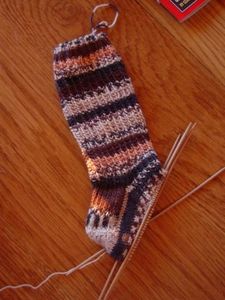 Here it is!  Three weeks of work on my sock and I'm finally doing gusset decreases.  I'm winging it, using a rib pattern I've admired at a friend's.  Sort of.  For the technical portion of the program (heels, gussets, toes), I'm using the The Knitter's Handy Book of Patterns by Ann Budd for guidance.

I have several balls of self-patterning or self-striping sock yarn, plus a little more variegated and even some in solid colors, and I'm looking forward to working them all... someday... but now that I'm seeing all the STR Clubbers getting their first packages, I wish I'd joined and that I was getting STR in the mail, too.  I don't know why I didn't.  I completely and totally understand Cara's obsession with that yarn -- I am in awe of the beauty and richness of nearly every colorway.

Watch this space:  The JenLa Wild Goose Chase, a.k.a. Auntie Meme, coming soon!  I can't wait to do this and I'm anxious to read others'.

That's all the knitting -- kinda lame, I know.  Click for more stuff.

Honestly, y'all are giving me the same advice that I'm dispensing all the time!  I should listen to myself!!  I think we all know things like this, really, but need occasional reminding and reassurance -- even permission -- that it's normal and okay.  After three weeks, you begin to wonder what's normal -- there's a new, evolving normal 'round here.

Prior to February 28th, the only place I'd ever been in a hospital was obstetrics, surgery (wisdom teeth), and regular hospital rooms (almost always just to visit).  ICU is a whole other world -- as is neurology, Michael's new address.  It looked like a regular door in a hallway, but it actually opened into another, more private, inner hallway-like working area with a glass wall/sliding doors/curtains on the other side as the actual entrance into the patients' rooms.

Michael was sitting in a chair when I arrived yesterday -- and had done quite a bit of sitting during the day.  They didn't need to suction his lungs at all yesterday!  The nurse said that he keeps trying to get up and go -- he's bored, for one thing, and he wants to get something to eat.  He didn't pass the swallow test on Monday, and I'm hoping that they'll do another with a more positive result today so he can start eating and drinking a little bit!  And if not, they'll just keep trying.  They've begun giving nourishment through the feeding tube on a schedule, as if he were taking meals, rather than continuously.  A schedule of physical and other therapies should get going pretty quick and keep him more occupied.

It is very strange.  I am not a small talk person.  I am more the blabbing, babbling, get your waders ready 'cuz there's gonna be a flood (followed by a drought) kind of person.  I've got stories to tell and I can be a passionate speaker and I can go on and on, but that's too much for Michael right now.  He needs it short, sweet, understandable, easy to respond to.  It's hard, too, because he doesn't initiate conversation and he doesn't ask many questions -- and he still has the trach.  Maybe as he starts doing more and getting stronger, it'll be easier to talk.  He's funnier than hell, but he's such a straight man -- such a GOOD straight man -- it's sometimes hard to know when he's being serious and when he's joking.  And now he's even straighter, with his body, head and neck braced -- the subtle body language and expression isn't getting through.  He gave me the finger yesterday for something I said -- I don't remember what it was, but the reaction was totally appropriate -- and I had to ask whether he was really mad or was he joking!  He was joking.  ; )

Sounds like he is progressing well. I think you are being the best sister ever by being there for your brother. You are a wonderful caring person, and I know the one thing you want more than anything is to have your fun loving brother back, but it's happening slowly. One of these days you'll wake up and realize he's back and all that time praying was all worth it.

Hugs to you Vicki.

Vicki, I can only begin to imagine what you and your family are dealing with. Despite your frustrations, though, it's coming through loud and clear that you've kept your sense of humor. From experience I know that that will be a tremendous help on this long journey back to some kind of normal. Hugs!

It must be frustrating. And it's all so new and foreign for everyone. Just go with the flow, I guess. Take each day as it comes. I would be horrible at that, by the way.

Brotherly love - ain't it the best? I'll be missing you this weekend. Ragging on Ann just won't be the same without you! L, C

Your sock is coming along nicely.

I just got my STR sock club yarn and I wish that I signed up for more than just 2 months. Now I understand everyone's obsession with STR. There is always the next round of memberships.

Fantastic! I'm spiffin' up my favorite jammies for Sunday. It's going to be tricky tho - gotta be at work.
You're taking care of YOURSELF aren't you dear - all this stress can wear you down. Go treat yourself to something.You deserve it.