Up
Oh, it's the twisty road!

The long and winding... 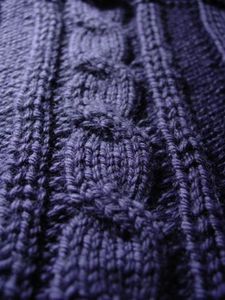 At this point, I have two blue merino squares knit and on the blocking board, plus another ready for blocking and one in progress.  I think I'm just going to keep on knitting and blocking blue squares for Christine's brother Jef and my brother Mike until time's up.  Each one has a cable design because, hmm, well, did you know that I like cables?  I realized, too, (sometimes it takes me a while) that the twisting, turning knitting of a cable also represents the long and winding road on which our brothers now travel.  It seems right.

I knit on the sock when I'm at the hospital and I'm not even half-way through the heel flap yet.  I get distracted...  Some of my SIL's hometown girlfriends visited yesterday -- oh, they're fun girls!  They usually take turns getting together at each other's houses a couple of times a year for merriment.  We told stories yesterday and laughed.  When they learned that Michael grew up as the only boy in a house filled to the brim with girls, they were not surprised.  They said that he just sits right down with them and fits right in; they liked him as soon as they met him.  It was nice.

The feeding tube and "art line" were removed yesterday.  He still has pneumonia, there are still plenty of tubes, and he was getting extra oxygen through that trach, but there's less and less stuff.  His eyes were open yesterday and it seemed like he may have been able to focus momentarily, he may have responded at times to the sound of people's voices.  He's moving much more; I think he's becoming more aware of the pain and discomfort.  He has these special mitts on to keep him from pulling things he shouldn't be pulling, but he keeps working them off.  When I went in to say good night, he had wriggled out of a mitt and was moving for the trach and the cervical collar (it's chafing badly under his chin) -- deliberate movements? involuntary? reactionary? -- I spoke rather loudly, as a big sister can, and told him to stop and what had happened and why he was there; he turned his head in my direction, looked into my eyes for a second.  It's really hard to guess the level of his awareness, whether he turned in my direction because I spoke or just because.  There are improvements, though we're always left wanting more.  Unless there's a reason not to, he'll be moved, "stepped down," to the neurological unit today.  ; )

Michael has always liked everything about The Beatles.  As a six-year-old, he sang Hey Jude to Mom over his walkie-talkie set. There's a picture of him as a teenager, standing in front of our house, proudly displaying a new Wings album and his body language says everything -- he's so excited, he's practically standing on tip-toes!

My dad just called me at work and Michael is WAKING UP!  My uncle, the flight nurse, was checking in this morning and Mike had gone for a CAT Scan to make sure everything was okay before moving him to the floor.  Michael was very, very agitated, so my uncle went over and talked to him and asked him, "Michael, do you know who I am?"  Michael nodded, unmistakably, "Yes."  Prior to his 19 years as a flight nurse, my uncle worked in the neurological unit; he knows how this works.  I can't wait to go visit...  Mom's checking on that...

WOW!!!! What wonderful news. Hang in there - for Michael and all of us too!!!

WOW! That's great news! So glad that your brother is improving. Nothing is worse than waiting and not knowing.

Such good news! Hope you get to see him awake soon.

How wonderful! I have been folowing Michael's progress since the accident and am truely delighted for you all. much love

This is great news!!!

That is fantastic news, Vicki! I can't wait to hear more. My squares on are there way, a couple miles south, to Christine as we speak.

That's wonderful news! Get some Beatles tunes in his new room.

I am so glad to hear he's waking up. My first blue square is on the needles right now!

Every night when I get home I have to come here to find out about Michael. I love your memories and I am pretty sure that you and Michael are pretty close to me in age. Tho y'all may be a bit younger. Because so many of your memories and things you did are so much like things I did with my brother and sister. I think I was about in 6or 7th grade when HEY JUDE was popular.Then again I could be way older :0

That is wonderful news. Slow and steady that is the way to win the race and with so much love and support Michael is sure to win! Don't forget to take care of yourselves along the way.

What terrific news - I have goose bumps! I will keep checking back and praying.

That is good news. We are all hoping for the best up here at our house. I am glad you are getting so much good information. Your brother and his wife are fortunate to have so much excellent support. I love the memories.

We are praying for you..take care.