On Thursday morning, I kissed my hubby on my way out the door and told him that I thought I'd be home right after work -- for the first time in six weeks!  A little later, I called him and told him that the only thing that really remains the same is that There Will Be Change...  I'd learned that the greenhouse right down the street from work was having a series of gardening classes and the first one, mainly about perennials, was that night!

I can't say that I learned a whole lot, but it was good to get the gardening mojo going.  One idea that I will put into use this year is to work more annuals in with the perennials.  In exchange for my $10 class fee, I got a $10 coupon and was eligible for door prizes -- they gave away four Dramm professional watering tool sets.  I didn't win one (my companion did!), but there were a half-dozen available for $10 and I made sure I snagged one.  I wasn't rude or pushy, I don't think I was even aggressive... I was determined to have one of the six.  (It thrills me that the Dramm company is right over on the lakeshore, in Manitowoc.)  I also brought home a few primroses, which are blooming and brightening the area around the kitchen sink and will eventually get planted outside, and a pot full of ruffly pansies.  I didn't find them at first, and then asked a lady where she got them, and then thought, "Oh, I'll just stop on my way home from work one of these days," but when I said that I especially loved the ruffly ones and she said that there weren't very many of those left -- well, bee-line to the pansy department!! 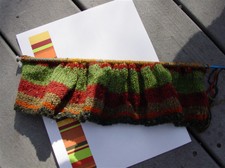 Madeleine had a bunch of girls over last night -- enough to cover the living room floor and the couch -- so while they took over my regular spot, I brought my knitting into the computer room and listened to podcasts while I worked on...

The Fib!  I love it!  I am using a combination of Alexandra's pattern with (I think) a very basic, modified drop shoulder cardi pattern.  I did some calculating based on my swatch, also determining that I think I'll have enough yarn, and I played with the (very limited) color feature of Excel!  I love it!  The print-out of the stripes represents the entire length, the width of the stripes, and the order of color.  I love it!  I stayed up past my bedtime, even for a Friday night, to complete one color repeat (seven colors) in the Fibonacci sequence (2, 2, 4, 6, 10).  I love it!!!

Have I said that I love it?

Several weeks ago, one of my sisters called and told me that she'd just taken every single thing out of one of her bathrooms and cleaned it and then put back only what she really wanted and she said that it felt so good!  I think I'm going to try it today.  ; )

Sounds like you have spring fever!! I am off today to get some mulch and some gardening tools!

Using Excel to chart the colors on your Fib is fantastic, and it's a great color combo!

Vicki, those flowers are glorious! They seem like such a present after months of winter and crappy browns and greys. I endeavour to put more annuals in with my perennials too (it's funny how some gardeners are such perennials only snobs but some annuals have such zest and flair); I love to see some colour quickly. The sweater looks gorgeous - the colours are so incredibly rich.

That stripe sequence is terrific! I'm glad you're enjoying the sweater.

I think Fibi is going to be beautiful. When I was younger (20's, early 30's) I loved all bright cool colors. These are the colors that looked good on me. Think bright purple, blue, magenta. Now in my 40's I really lean to the warmer earthier colors. I'd read somewhere that the as we age our colors choices change and I'm finding that very true. I'm entranced with your sweater color choices and will be buying and swatching some of those colors in the near future.

The gardening class soiunds like so much fun. I miss the days that I used to work at a plant nursery!

The colors of your fibonacci are to die for! so pretty! I can't wait to see how it comes out!

As always, we are so happy to hear of your bro's progress. We've been holding you and your family in our hearts these many weeks!

Wow, I am impressed by your energy! The Fib is great, and I will have to try out that Excel feature I didn't even know about. I think the bathroom idea is a good one, but it will have to wait for sunny weather and open doors and windows around my place.