Objects in picture are larger than they appear
Sweet Slumber 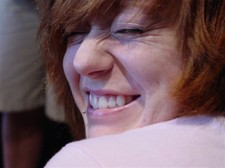 The second-born of my three April-born offspring is the first to celebrate her birthday -- TODAY!

It's fitting that we'll be going to my brothers for a short visit today.  It was 19 years ago today that I stopped in where he worked, between labor pains, to drop off his updated resume -- he was looking for a new job and if I didn't do it then, I didn't know when I'd get to it.  I'd awakened that morning with a twinge or two, but decided to go to my preg-o exercise class, anyway.  Uh-huh, all that movement -- even a little jumping around -- made those twinges a lot more meaningful.  I picked up Katie, stopped in at my work, stopped in at my brother's work, went home and called DH and my mom, and waited -- as the labor pains got stronger and stronger and pretty soon I was on the floor and Katie was bouncing a ball around -- I got to the hospital at about 1:00, popped soem Tums in the labor room, and Ali was born a couple of hours later.  I used a birthing chair, thinking I was being all down to earth and natural and whatnot, when in reality it was like a carnival ride -- I was so ridiculously high up in the air, the doctor, looking like she should have been wearing a catcher's mitt, sat on a stool below -- there could have been a peanut vendor or a Sno-cone wagon nearby -- it was ridiculous.  Not really what I'd intended.  But anyway, I pushed and she was born and I heard, "It's a Girl; she has red hair" and I didn't believe them.  They were telling the truth.

Alison, I love you. 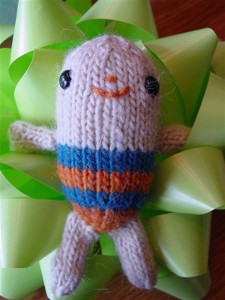 Since the first moment she laid eyes on him, Alison has wanted an Oddfellow.  She got one for her birthday!  I finished him up this morning, while she and Maddy looked for their Easter baskets.  Maddy insisted on the hidden baskets.  For several years, when the kids were littler, my sister and I did treasure hunts for our kids with riddles and clues that eventually led them to their baskets.  We were inspired by a similar Easter treasure hunt one year when we were kids.  This year, my sister stayed home (they got a new puppy yesterday!), but Maddy made her own little treasure hunt for Alison -- who had to hunt for her birthday present this morning, too.  I'll have to do the same for her.

April is a very busy month; still to come is Katie's birthday on the 22nd (though she'll be celebrating in Munich this year) and Maddy's on the 25th!  Also celebrating April birthdays:  two cousins on April Fool's Day, an aunt who shares Ali's birthday, an uncle whose birthday is tomorrow, my nephew, and my grandpa.

Happy Birthday, Alison! And what a cute little oddfellow.

Happy Birthday to Alison! We have the birthday run in June/July. 8 birthdays in 3 weeks.

And that wasn't even the first comment I tried to post. Said I loved Mr. Oddfellow too!

Happy Birthday Alison, April is a very busy birthday month for us as well. My boy turned 5 today too.

Our family's birthday season is in July. At last count, I believe we have 9 birthdays and an anniversary. Whew!

Happy Birthday to Alison! Mine's on Wednesday. All those April birthdays, Vicki! My big birthday month is June.

Happy, happy day, Alison! You are indeed a special girl to your mom.