With friends like you...
I'm not letting it bother me... 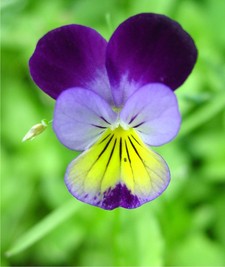 Johnny-jump-up!  From a single gift pot that the girls gave me for Mother's Day a few years ago, I now have a growing drift in one of the front garden beds.  It is amazing to see these en masse, hundreds of little purple, lavender and yellow flowers, each made up of five petals, all with the same general shape, but every one so very different from its neighbor -- more yellow, less yellow, more lavender, less lavender, a big (or little) beard of purple, or no beard at all, bold center markings, or just a hint.  It's one of Mother Nature's many, jaw-dropping, breath-taking, awesome displays.

The ABC-Along has been so much fun!  I've been a big fan right from the start.  The ABCs are in my blood, having embroidered many a reproducton sampler.  The ABC-Along is a way to play with my camera, and a fun way to explore and express myself.  I set some guidelines and figured out how I wanted to approach it, and have plans to print a photographic Abecedary with my photos when the year is over.

I signed up for Ina's "I" challenge when it was first announced -- way back around the time of "D" or "E," I think.  Ina and Anne have announced the finalists, and my post is among them!  How cool is that?  (Way cool.)  Go -- have a look at all the other entries, and then VOTE!  I'd be pleased if you voted for me, of course, but do vote for the one that you like best.  ; )

I voted for you, of course! Because I loved seeing pictures of the girls!

I went and checked out the other entries just to be fair but yours was definitely still my favorite. Your "individuals" are wonderful! I love the J too.

I voted and you were winning when I did, good luck, I did love your I entry.

Of course I voted for you because yours was the BEST!

Duh - of course yours was my favorite!!

Although I liked the "inheritance" theme, I thought your photos were THE BEST and great fun too. Hoping you win.