You say "Lima" and I say "Llama"
Sorta random

Do not adjust your dials!  Despite appearances, this has not become a food blog...

It was DH's dad who sent those very good yet very bad chocolate cherries to the girls that I could not resist, and the more fruity portion of their gift arrived on Friday -- pears and apples and teensy weensy miniature baby bananas.  I immediately grabbed my camera, as you can see, and was told that Katie and Maddy had each already photographed the cute bananas.  I don't know what that says about us.  ; )  They taste like regular bananas, though gone after three bites -- the only discernable difference is that the peel is a bit thinner!

It was a very relaxing, stay-at-home, 3-day holiday weekend, and yet I got a lot done -- even with House, M.D. - Season One making a house-call at our house.  On Saturday, by chance, a stumbled upon a rummage sale and bought about a half-dozen balls of Sugar & Cream cotton for about 50 cents each -- I already have at least that much, but with the Mason-Dixon warshrag on my mind, well, you can't have too much and the more the merrier as far as colors to choose from!  It was just the impetus I needed to start -- that, and having spied Vera's finished work on Friday (she's right, they are just like potato chips!), not to mention her adorable baby kimono (I just learned this morning of a baby boy due in October!).  I knocked off three dishrags over the weekend -- each a little bolder and more bodacious that the last.

On Saturday afternoon, I went to the nursery -- yet again.  I didn't really need anything, but it's relaxing and everything's so pretty and I was asked to ride along!  You know I came home with somethin'... tomatoes!  After a hiatus of at least a dozen years, I'm trying them in containers this time rather than anywhere near the toxic black walnut tree.  I'm so excited!!  I've got a Big Boy and a Better Boy, already potted and caged, and a Sweet 100 cherry that will hang.  I've been reading the Eat Local Challenge blog, mostly because of Birdsong, and while nothing can be more local than the tomatoes in my own back yard, I have found a CSA on the outer edges of my general area that participates in a local farmer's market where I can pick up my share, which I'm really looking forward beginning at the end of June! 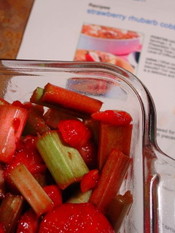 While Trellis soaked, I used up the rhubarb I'd been given and made a WW Strawberry-Rhubarb Cobbler and a batch of polenta!  I may have used a bit more rhubarb than called for and Katie did tell me that the strawberries weren't sweet, but I made no adjustments to the sugar content of the recipe and man, that's one tart cobbler!  Luckily, a little scoop of frozen yogurt is all it takes to bring it around.  ; )  I have heard of polenta, but have never seen nor tasted it in my entire life, but that didn't stop me from making a HUGE batch.  It's one of the easiest things in the whole wide world to make and... hey, Mikey, she likes it!  I have had it only with parmesan cheese and butter, so I'd love to hear how anyone else likes it best!

One more food-related item -- I've been challenged!  This, I believe, shall satisfy the Spammer/ann:

The water looked like pea soup when I pulled Trellis out, and the green dye just kept coming out as I rinsed.  I pinned it all out and it looks great, but the color is quite a bit lighter.  I also found instructions online to make twisted cord using an electric drill and as soon as Trellis gets put together, I'll start experimenting with making cord and frogs to see if I even want to consider that for Fib.

I wasn't able to visit the llama farm yesterday -- their line was either busy or there was no answer, and I don't want to just drop in when the sign says to call first.  The farm is on the last corner before turning down my brother's road, there's no way to avoid it, and I know it'll happen eventually.  Yesterday may not have been the best day, anyway.  I'm thinking that perhaps in muggy, hot, 90+ degree weather, the llamas (with or without their "beans") are best enjoyed from the comfort of one's air-conditioned vehicle, rather than up close and personal.

Love those cute little bananas! Good luck with the tomatoes. We (well, Dale) got our garden planted yesterday. I can't wait for fresh produce from my own kitchen garden.

Crap. Now I'm going to have to come up with a Haiku. I thought if we just ignored her....

I'm on the phone with Ann and I read her your Haiku and she said,

I spent yesterday on a llama and alpaca farm. It was only 60 degrees and the animals were happy. Poor Smith got hit with llama spit! Beans would have been MUCH better.

what I really said was smooth like a suppository!

although I don't like the subject matter, I love your haiku! and I got a real giggle from your email were you told me you haiku'd. ; ) love it as a verb!!

Vicki-I made that cobbler this weekend too and it was soooo good! I didn't have enough frozen strawberries (I doubled the recipe) so I threw in frozen peaches with the rhubarb and strawberries and it was excellent! thanks for the recipe!

I wish I were there eating your cobbler - Strawberry/Rhubarb is one of my faves, but I was too busy with guests this weekend to just whip one up. I am glad you found a CSA! I'm with you on being able to eat the tomatoes right out of the yard. I had the same experience with my dyed yarn this weekend, just kept rinsing and rinsing. We will have to see if someone in blogland knows a good rinse or something to get the dye to stop bleeding for good. Looking forward to a photo of Trellis, even if lighter.

Oooh, House. I love House. As my mother used to say, he can leave cracker crumbs in my bed anytime.

OK - I have to come clean. I really don't know what rhubarb is. Fruit or vegetable? I've seen it, heard that people eat it but have never dared to try it. Should I??