I woke up at 3:30 this morning when DH got up to let out one of the kitties -- he does that almost every morning and most of the time I'm not even aware (he is much more sensitive to their early morning shenanigans and/or that's a time of very deep sleep for me).  This morning, though, I stirred and could not get back to sleep, mostly because of pain and tingles and numbness in my hands and arms, especially the right.  I tossed and turned and rubbed and shook and flexed and stretched -- finally, I got up and took some ibuprofen, shaking and flexing all the way down the stairs and back up, and managed to get about an hour of actual sleep before the alarm went off at 5:30.

I did a little bit of planting over the weekend, but nothing too strenuous; I did some knitting (including catching-rays-on-the-deck knitting), but it wasn't all that much and not very strenuous, either; I trimmed and chopped a bunch of rhubarb and made sauce (yum), and there's enough yet for a future cobbler (I even found a WW recipe).  I've suffered on and off, to varying degrees, with carpal tunnel-type problems such as this ever since my first pregnancy, much of it having to do with how much extra weight I'm carrying around, and the pain this morning was out of the ordinary -- I couldn't think of what I'd done to bring it on so fiercely.  This morning, talking rain, gardens, invasive weeds and what-we-did-over-the-weekend with my friend, I remembered the big trigger bottle of weed killer that I dispensed yesterday afternoon.  I hate to do that, and if you saw my yard and gardens it would be abundantly clear that I don't get too knotted up over weeds, but once in a while I must.  Oh yeah, ouch -- that's what did it!  I experienced some discomfort during the doing, even, switching hands a couple of times -- funny how I put that right out of my head. 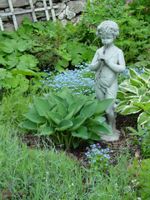 I found three new plates at a rummage sale on Saturday.  They're destined for a mosaic project, but will hang out around the deck 'til I'm ready.  I paid a dollar a piece, which is a little more than I like, but these are perfect mosaic fodder with so much pattern.  Maddy wants to do a project this summer, also, but we won't likely get started 'til July.

I still have a few viola starters to find spots for -- shouldn't be too hard, really.  I planted five pots for my new plant stand, a large basket and a smaller planter for the deck, and the front porch planter.  It was a great weekend for that kind of work.

I worked the fronts for Trellis at the same time to the point where neck shaping starts, then worked each side separately -- I've joined one front to the back with a three-needle bind off at the shoulder and might possibly have the second one done tonight!  Heh, then Trellis and Fib will both be at the same stage -- ready for sleeves to be attached, side seams to be sewn, collar to be knitted/finished, and buttons/closure!

Oh, you'll probably learn more than you ever wanted to know if you were to Google "testicle festival"...  I would just like to say that they seem to be held most often in the west -- you know, cattle country.  Here in America's Dairyland, I wouldn't think there'd be enough testi to merit a festi, but it's Wisconsin and it's spring -- and it's been a long, long winter -- so we'll celebrate just about anything!  Pretty soon the wood tick races ought to start up north...

DUDE! I so need a t-shirt from the Testi Festi! I'm pretty sure I've got the balls to wear it. ;-)

"Enough testi to merit a festi" - I almost snorted tea out of my nose!!

I am so sorry to hear about your pain issues! I have fibromyalgia, which I can thankfully usually manage to keep in check with careful lifestyle choices, but every so often it gets the better of me. I recently discovered Alleve (naproxen sodium) as a better (for me) alternative to ibuprofen and Tylenol. Those actually have almost no affect, but the Alleve takes the edge off for several hours and doesn't upset my stomach. When I take advil - I usually take a prescription dose. I hate that feeling that my body is restricting me from doing what I want to. It's awful.

I too got a great laugh out of the enough testi to merit a festi --- you really should do a cafe press item for that one!

I feel the same way you do about the weeds. Every now and again I go around with the round up, but certainly not often enough. I tell myself that I like the messy look.

I have been to Cow Chip Throwing Festivals...it's totally a Western thing. You really should see someone about the pain. They can help you learn how to stop it, deal with it and keep it from happening.

I can so relate to your pain issue. At least you were able to narrow it down somewhat; be careful with those pesticides! I saw this woman come into emerg (I was there on one of my many trips) and she had walked into a field that had been sprayed; her limbs were swollen, she was feverous and confined to a wheelchair! Makes you wonder what they do to our innards! I love the idea of a testicle festival - long winters indeed!

Is that a Weight Watchers rhubarb cobbler recipe? I've got a great recipe for rhubarb upside down cake but its not very weight watcher friendly. can you post yours?

I like the placement of the wood nymph with the hostas and myo-whatevers.

The hands are tough. That's a great deal of pain for a little bit of exertion.