Well, let's just say that we're all so very fortunate to have such SMART and HELPFUL and WISE friends who are willing to share their thoughts and experiences and ideas -- with love and care, too.  ; )

You know, I was watching a show on PBS the other night -- Pioneers of Primetime.  It was very enjoyable, about the first "superstars" of TV, mostly comedians -- Milton Berle, Bob Hope, Jack Benny, Red Skelton, Lucille Ball.  A big fan of old movies, I'm also a big fan of old TV; I never get tired of watching old clips.  Anyway, they talked a lot about vaudeville, of course, because most of the first "pioneers of primetime" were big vaudeville (and then radio) stars before television.  Vaudeville or the circus -- that's what people in small towns did for entertainment before radio and the movies and TV.  There were theaters in every town (sometimes more than one), lots of traveling shows that employed lots of entertainers -- singers, comedians, jugglers, clowns, novelty acts, acrobats, dancers.

I was watching the show (while knitting, of course) and learning about the huge number of theaters that once dotted the country and all the performers that populated the stages night after night, and I wondered:  What are all the jugglers doing now?  You know?  Back in the day, if juggling was your thing, or tap dancing or spinning plates or singing -- I daresay, even yodeling -- you could probably have found employment with so many stages to be filled.  But these days, if you're a juggler, it is likely that you're not juggling to pay the bills.  Well, you are probably juggling to pay the bills, but the juggling is not providing the means with which to pay.  What kind of work are jugglers settling for these days?

I always wanted my kids to get a degree -- any degree -- because I think it would help them in the real world, no matter what they did, and it would be much easier, later, to add to an existing degree rather than start from scratch -- particularly if they were around a certain age.  This is me talking, from my perspective, having never earned a degree of any kind.  Now, at 47-1/2, I have a much better idea of what kind of work, requiring a degree, I'd like to be doing, but I really have little hope of landing my first job in a new field in my early- to mid-50s (when I'd finally have the paper), especially if I required health insurance.  It was tough enough to land a regular old job -- without benefits (not my current job) in my early- to mid-40s -- and I've been watching my sister, with a special education degree and experience, only a couple of years younger than me, struggle to find full-time, permanent employment (with family health insurance) in her field for a couple of years now.

It was Alison who put together the framed piece with the old photos and floral embellishment for my Mother's Day present.  It wasn't the first time she gave me bleeding hearts for Mother's Day.  ; )  I keep this one on permanent display in one of the kitchen cupboards.

A Golden Tiara Hosta, a spurge.  We've had some dramatic weather the last couple of days -- the cloud formations have been amazing with storms to the south, storms to the north, storms to the east and west -- sometimes all at the same time!  When we pass from the "mostly cloudy" stage to "mostly sunny," I can't imagine how things are going to pop!  Below, left, my garden three weeks ago; below, right, my garden two days ago. 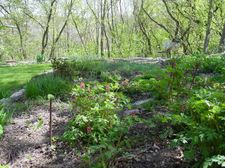 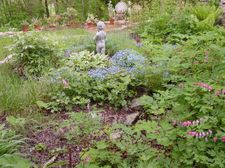 Oh, yeah, knitting.  I'm still contemplating how finish/close Fib -- and I still need to do the seaming so I can try it on (maybe this weekend).  I have picked up Trellis again -- Mack's birthday is in 3-1/2 weeks!!  I can't believe he's going to be one year old.

Happy almost-birthday to Mack! Ambrynn will be right behind him and she'll turn one on 6/28. I really want to get a sweater finished for her for her first birthday.

My daughters are a bit younger but I'm 100% with you on encouraging them to earn their first degrees when they're young. It's never too late to do it though. If you know what you want to study then go for it. Even if it doesn't result in a job I bet you'll be happy that you did.

I love your garden pictures.

Hi Vicki, I'm a frequent lurker to your blog and fellow Cheesehead. I just had to comment on your post today about jugglers. If you tune in to Jay Leno tonight you'll get a chance to see two jugglers from Wisconsin for about, oh, 30 seconds. They won't be juggling on the show tonight, but yes, they do juggle professionally! There is an article about them here: http://www.leadertelegram.com/story.asp?id=68933. I really enjoy reading your blog. I have two college student sons and a 17-yr. old daughter and can relate to so much of what you write. Thanks and keep blogging!