Maddy & DH returned yesterday after being away for nearly three weeks.  It's nice to have them back!  Maddy has already made connections with bunches of friends and made plans, practically to-the-minute, through the weekend!  Phone usage will pick up again, no doubt; good thing I'm having cable phone installed next week!

It was only the last few days that tasks were presented at home for which I was unqualified and/or uninterested and/or the ick-factor was too great and so I jotted them down on a list for DH to attend.

Here is DH, performing Task #1, and a parting shot of the enormous mama guarding her offspring-to-be -- we'll all be much happier now that they're in their new home, far away from mine.  The plug was purchased at the hardware store last evening, which was located right next to the grocery store where the softener salt was purchased along with ground turkey for some of the most savory turkey burgers I've had in a long time -- and it was a WW recipe!

Having basically come to a stand-off with the built-ins, the huge filing cabinet (which I dragged, pushed and pulled to and fro the other day), and the appliances that cannot be moved in the laundry/computer room, I had a consultation with DH in regards to that project.  In response to my lamentations of the limitations due to built-ins (they're great and all and I know they add value and blahblahblah, but...), he said, "Why don't we take it out?"  Since he was the guy who built them in all those years ago (19, to be exact), I didn't think he'd be all the anxious to un-build them.  They've served their purpose, he said, and now we don't really need them anymore.  What's not to love?  We'll be able to leave some shelving; I'll have to do a little painting; maybe we can even get some carpet or a rug; and best of all, we'll be able to use the big, honkin' computer desk (sans one upper shelf) that I'd otherwise have to somehow get rid of -- and I'll have the MOST marvelous view of my lower garden whilst computing, and I'll hardly even need to turn my head... I'll need only glance.  ; )  So, three little jobs and an impromptu remodeling project -- Welcome Home, Honey!  ; )

As the kids said:  It just wouldn't seem like home if there wasn't some kind of remodeling thing either in the works or under consideration. 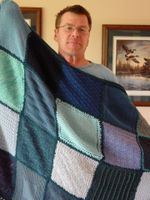 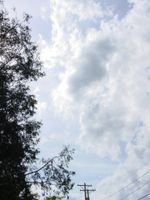 I spent Father's Day at my brother's house; my mom and dad were there, and one of my sisters.  These blanket pictures are actually from my last vist -- doesn't he look stronger?  He had a neuro check-up yesterday and he's doing well -- as expected.  There are at least two more docs to visit in the next week or so and he continues with physical therapy for his shoulder.  Progressing... blue sky with a few lingering clouds, dissipating some, but no storms on the horizon.  ; )

He does look strong - like nothing ever happened. I Jon didn't have a home-project going on around here all the time, I'd suspect he was fooling around!

Your brother looks really good. Glad he is progressing so well.

And your hubby is very brave. I don't think I could ever get near a wolf spider like that. They just give me the heebeejeebies.

And isn't hubby nice to facilitate the remodeling? What a guy!

Please post pics of the view, would love to see it.

After the spider is moved (the idea of all those babies make her even more disconcerting) the rest of your 'stuff' sounds pretty good. Hoo and Ray for Michael!

So glad DH returned to do the tasks. At our house the division of labor is that heavy, outside or yucky belongs to Dale. Anything else is mine. But yucky? That covers a LOT of ground. ;-)

I know you're happy to have DH back - I'm glad the darn spider is gone ;)

Your brother looks amazingly better too!

The blanket is beautiful, but your brother looks FABULOUS! Rusty is a gem to get rid of those spiders for you. Give him a hug for me! L, C

Your brother and his blanket- wow! Looks great! Wish I'd gotten on the ball to make a square for it!

On the wolf spider- eww! I probably would have squished it.

The blanket is amazing and your brother does look like he's doing so well. And your hubby, well now, isn't he a catch. Have fun with the remodel.

Vicki, you never mentioned that your brother was such a hottie.

ps. although I seem to remember something about him being married .... and me too ;)